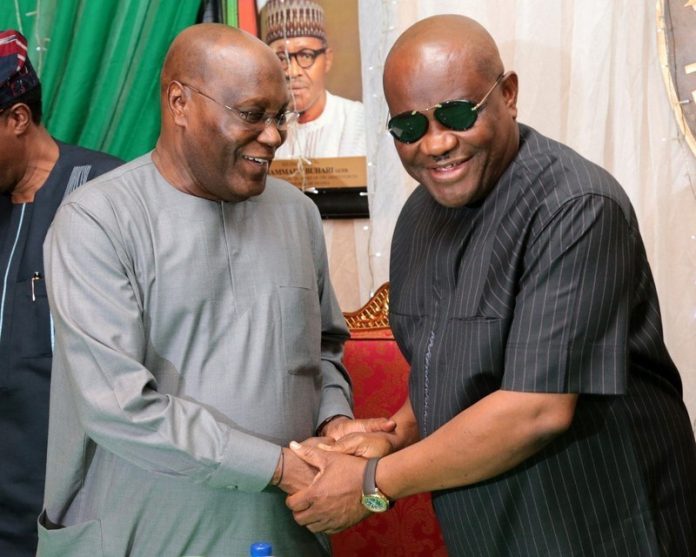 The lingering face off between the presidential candidate of the People’s Democratic Party, PDP, Alhaji Atiku Abubakar and Nyesom Wike, Governor of Rivers State is having a multiplier effect in Imo State chapter of the party.

Recall that all has not been rosy between Atiku and Wike since the party ended the presidential primaries this year.

After failing to win the ticket and not considered for the  Vice Presidential position, Wike and his supporters have become a strong factor in the affairs of the party asking for the resignation of the party’s national chairman, Senator Iyorchia Ayu to enable balance of equation concerning the positions held between members from the North and South divide.

While the squabble over the call for the resignation of Ayu is going on at the national stage, Imo PDP is not left out as this has noticed strong division in the rank and file of the party.

It’s no longer hidden that the interest of the two major actors of the party in the state; Rt Hon Emeka Ihedioha and Senator Sam Daddy Anyanwu can be noticed in what is happening at the national stage of the party.

Ihedioha, the governorship candidate of Imo PDP in 2019 election is believed to be on the side of Atiku while Anyanwu purportedly has sympathy for Wike’s camp.

Trumpeta has also noticed that in the discourse over the call for the resignation of Ayu by the Wike Camp, those supporting Ihedioha and on the side of Atiku are opposed to the national chairman vacating the position while notable followers of the national scribe support the resignation agenda.

Already, a cold war  between agents of Ihedioha and Anyanwu has been ravaging Imo PDP and the disagreement concerning Ayu’s resignation has further polarized the unity of purpose in the party.

Going through many social media handles especially in Wassap groups and Facebook accounts of Imo PDP members, this newspaper noticed that reactions of the party have been on which divide the party members belong to.

It’s a well known fact reasons for the  support base of the two camps are linked to their separate interests for 2023/4 governorship ticket of the PDP.

While those of backing Ihedioha want Ayu to remain and safe guard the party structure for them ahead the primaries, Sam Daddy Anyanwu’s backers want a change that would place the national secretary at a very great advantage for the ticket.

Trumpeta recalls that the very sign showing schism in Imo PDP traceable to the Ihedioha/Sam Daddy Anyanwu rivalry emerged during primaries where the issue of Delegates for the primaries caused discord between the two camps.

The call for Ayu’s resignation has again resurrected the division in the party as 2023 elections beckon.