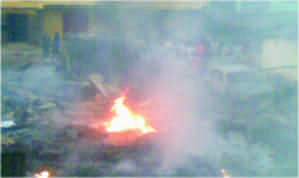 Civil servants in Imo State have expressed their bitterness and anger against the office incharge of Workers data processing exercise, otherwise known as Imo Data Centre.

The workers from various government Establishments on Tuesday 20th of September 2022 complained of importation of unidentified youths in various Departments of the Ministries and Government Agencies.

The aggrieved workers who claimed that they have not received their salaries for a very long time now alleged that the workers at data centre have turned things upside down in the civil service by allegedly smuggling in names of unidentified youths into the payroll of some Government offices.

The protesting workers revealed the alleged fake civil servants have caused problems as the wage bill has now become outrageous.

They maintained that the original and real workers are denied of their salaries while the fake and imported staff are the ones enjoying.

A number of workers in various Departments have now skyrocketed.

In addition, the aggrieved workers revealed that apart from imported names into Civil Service and MDAs, staff who are supposed to retire in three months time were now forwarded to pension list.

We gathered that the affected staff have started receiving pension when they are still in active service. Moreover, what they received now is short of their monthly salaries, it was said.

Another confusion that was revealed is that of salary staggering.

According to the aggrieved workers, staff from different Civil Service and MDAs were mixed up. Names from different Departments were joined together and as a result, so many things allegedly went wrong.

Report has it that many staff did not receive July and August salary upon already existing unpaid staff, new ones are now coming up.

It was further gathered that so many Civil Servants were denied their salaries because of non attendance at the verification venue without proper MOPOP and investigation to ascertain the true position of things.

Another problem according to our source is that some staff who were alleged to have up to one or two months to retire from the Civil Service are now facing serious frustrations as they have been sent to compulsory leave.

These factors mentioned above have made experts to start raising alarm. A good number of Imo workers are now calling on the State Governor, Senator Hope Uzodinma to consider it necessary as a matter of urgency to rescue the crisis in the Civil Service before it escalates.