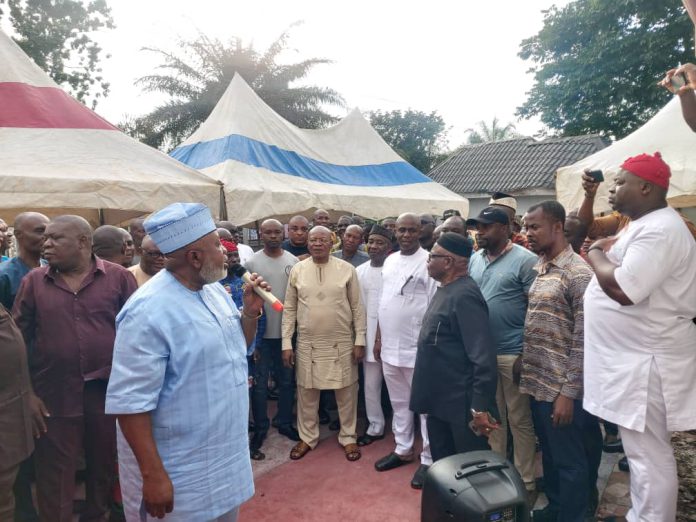 The people of Ikeduru Local Government Area, Imo State have collapsed into the Emake Ihedioha 2023 Governorship project, following the visit to the LGA by Ihedioha Reelection Movement, IRM, a voluntary Group led by Sir Bon Unachukwu, a native of Atta, in Ikeduru LGA.

The Group which comprises of Members representing the Nine Local Government Areas in Owerri zone, was hosted in the palatial premises of Chief Paschal Uzo, in Umudim Ikeduru.

The Secretary of the Organization, Chief Henry Ekpe, who doubles as Master of Ceremony (MC) introduced why IRM was in Ikeduru, which is nothing but about Re-election Emeka Ihedioha as the Governor of Imo State.

However, it was the Coordinator-General and son of Ikeduru LGA, Sir Bon Unachukwu who put it down point by point, why Imo State would be losing a lot should Emeka Ihedioha not join the Imo Governorship race, to complete the sterling job he started before he was removed from office just after seven months.

He said that Ihedioha Reelection Movement was formed by people of like minds and self funded, to appeal to Ihedioha to join the race.

He expressed happiness by the number and caliber of people that trooped out to welcome IRM in his own LGA.

The host Chief Paschal Uzo, an Abuja based Business Mogul, said he ran back home immediately he heard IRM was visiting Ikeduru LGA and volunteered that his House be used as the Reception point.

He said that Ihedioha is not only a good man, but a selfless politician, whose short stay in office showed that Imo State will get it right if the proper people are in office.

Chief Uzo quickly donated the sum of one million (N1m) to IRM, and promised to do more as the project progresses.

The Coordinator of IRM in Ikeduru LGA, Chief Callistus Mbaome assured that IRM will ever remain behind Ihedioha, adding that Ihedioha is the rightful person to champion the rebirth of Imo State after the stress the State has passed through in the last 3 years.

They all concurred on Ikeduru Reelection Movement, and promised to work hard for Ihedioha to pick the Imo PDP Governorship ticket.