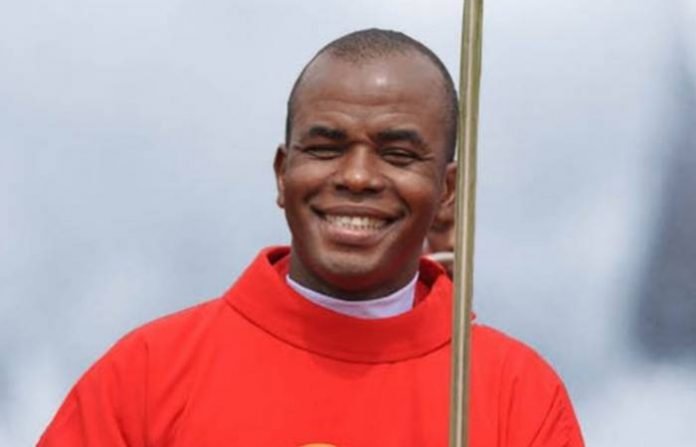 Confusion has greeted the removal of the Spiritual Director of the Adoration Ministry Enugu Nigeria, AMEN, Rev. Fr. Ejike Camilius Mbaka by the Catholic Bishop of Enugu Diocese, Callistus Onaga.

He was substituted with Rev Fr. Anthony Amadi.

Bishop Onaga who is the Local ordinary of the Diocese, in his letter of removal transferred Mbaka to the Monastery for further prayers and Evangelism.

This was two days after the suspension ban on the fiery cleric from holding any gathering at the Adoration ground was lifted, and officially announced by the priest.

Hence, Mbaka celebrated his last Mass with the multitude Adorers on Sunday, before his exit as the Spiritual Director.

Following the circumstances surrounding Fr. Mbaka’s removal, tongues are waging in both positive and negative sides.

On the positive angle, feelers have it that Mbaka’s removal was long overdue following his perceived involvement in politics.

They thumbed up the Bishop for transferring him since they believed Mbaka is enmeshed politics, dictating who or not is worthy to vote for, rather than focusing on his priestly calling.

On the contrary, aside Mbaka’s mammoth followers, majority of the people on the blogsphere questioned why the Bishop would remove him, a day after lifting his suspension.

They explained that as a Priest, Mbaka should not be ostracized for speaking what he got as a vision from God concerning Nigeria’s politics.

Many others queried the principle of freedom of speech in a democratic setting like Nigeria, hence termed his removal as infringement of his right from both the Church Leaders and supporters of such action.

Recall that Bishop Onaga shut down the Adoration Ministry for over three months ago over uncomplimentary statements of the fearless Clergy against the candidature of Peter Obi of Labour Party.

Again, on resumption, during his homily on Sunday, a viral video quoted to be Mbaka’s speech saw him making comments concerning the next general elections, although this time, no candidate’s name or Political party was mentioned.

This, sources said, may have prompted the Bishop to transfer Mbaka, as it seems the three months suspension could not allow the fiery priest retrospect over making political statements that make rock the Nation.