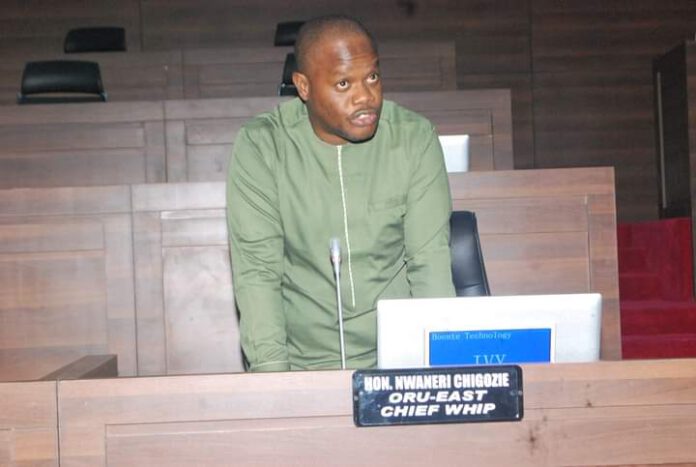 Apparently concerned on the welfare of his constituents and numerous road users of the ever busy Awo-Omamma, and Oguta- Mgbidi express roads in Oru East, and Oru West State Constituencies, respectively, the Chief Whip of the Imo State House of Assembly, Hon. Chigozie Nwaneri has called on the Governor, Senator Hope Uzodimma to direct for palliative measures on the deteriorated Roads, mentioned above.

The plea followed a motion moved on Tuesday, November 15, 2022 at the floor of the Legislative House.

Hon Nwaneri who represents Oru East State Constituency, while presenting his motion recalled that there had been series of road mishaps on the said spots, especially ones that claimed lives.

He regretted that if the spots were passable, most of the accidents could have been averted.

Referencing the approach of Yuletide season, Hon Nwaneri asserts that the socio-economic relevance of the listed Roads are numerous, and serves as the major route for all who would return home for the Christmas celebrations.

He did not mince words in eulogizing Governor Uzodimma for his chains of road infrastructure in rural and urban cities.

For Nwaneri, the Governor has done marvelously well in giving the State such a durable roads construction that cuts across board.

Further recalling the poor state of the Owerri-Orlu, Owerri-Okigwe, and now Owerri-Umuahia roads, he thumbed up for Uzodimma for putting into consideration the necessity and its economic relevance when he ventured into the construction of the roads.

To that effect, he pleaded to him to also consider the need to cause the Commissioner for Works and the Federal Emergency Road Maintenance Agency, FERMA to visit the Awo-Omamma, Oguta junction spots and do palliative measures.

The seconder of the motion, Hon Eddy Obinna lauded Nwaneri for his passion and display of a great role as the People’s representative. He added that the Governor has continued to showcase his genuine love for Ndi Imo, and won’t frown at the prayers of the motion.

He said, “You have truly displayed the qualities you have, and have also shown you are a good representative to your people”.

The Lawmakers who spoke in turns took time to appraise the 3R led administration over all the lofty projects in Imo State.

Most of them further recognized the Owerri/Onitsha Road which harbours the Awo-Omamma, Oguta-Mgbidi Road as most useful road in the State which shouldn’t be allowed to deteriorate any further.

Prayers of the motion reads, “Aware that the state of the said Owerri/Onitsha road is nothing to write home about with some particular spots in very bad state of disrepair and decay thereby causing a lot of havoc to commuters who ply that route;

“Pointing out that the Awo-Omamma junction appears to be the worst hit as part of the road has virtually caved in and could lead to heavy loss of lives especially this yuletide season if not addressed or attended to immediately;

“Be it resolved by this Honourable House to urge the Governor of Imo State, His Excellency, Dist. Sen. Hope Uzodinma to direct the Commissioner in charge of Ministry of Works in the State to embark on palliative repairs of that road especially that Awo Omamma junction to avert the imminent danger to lives of Imo people and others posed by the level of decay on that road and that particular spot.

“Be it also resolved to urge the Governor to direct FERMA to as a matter of urgency deploy men and materials to that road especially that Awo Omamma junction to effect repairs on that road before the festive season commences to avoid undue hardship on road users who ply that route”.