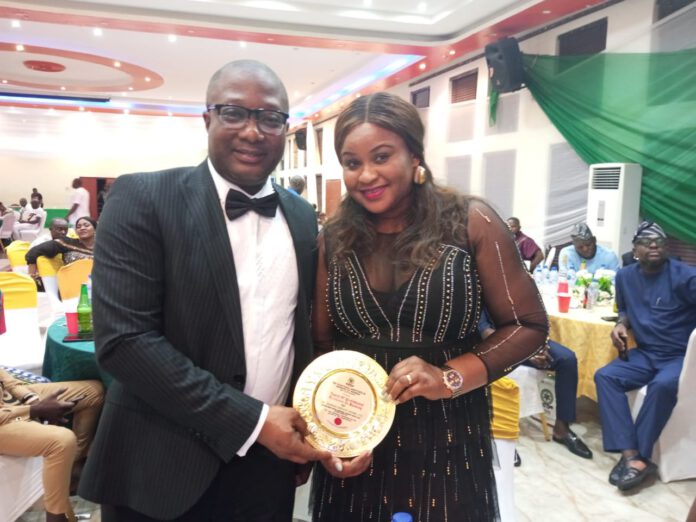 The honor came during the end of the 2022 CIBN dinner and award night held on Saturday, November 19, 2022, at the Rockview Hotels, Owerri, Imo State.

Trumpeta Newspaper learnt that Oguibe was considered worthy of the National honour following his imprints in the banking sector since his enrollment 24 years ago.

The year’s theme was, “Building resilience for Economic growth in a challenged economy; the agricultural finance option”. It was delivered the Imo State Accountant General, Mr. Linus Okafor.

In company of his adorable wife, Mrs. Chinyere Clara Oguibe, the refined banker was eulogized for keeping to the tenets of the job, as well as being a role model to many.

Furthermore, Mr. Oguibe was bestowed with the honour following his immense contribution for the growth of the organization, as well as his uniqueness.

According to the Imo State CIBN  Chairman, Mr. Rogers Augustine I. Nwoke, the dinner/awards night marked the end of the 2022 bankers week which began with a football tournament between respective  banks in the State.

While presenting the award, it was noted that the annual Bankers dinner and award night had remained a tradition to the CIBN.

Also, bankers are said to utilize the opportunity in taking stock of activities in the year, and to further re-strategize for a better year coming.

Responding, the elated award recipient acknowledged the effort of the organizers for deeming it fit in uniting Bankers under CIBN.

He opined that Banking has remained a noble profession with major responsibilities to social stability.

Oguibe reassured  that the award would spur him into impacting tremendously in the society , and the banking industry.

He didn’t mince words when he promised to impact in lives, especially the upcoming workers, as well as his continued support for the CIBN.

He is happily married with children.