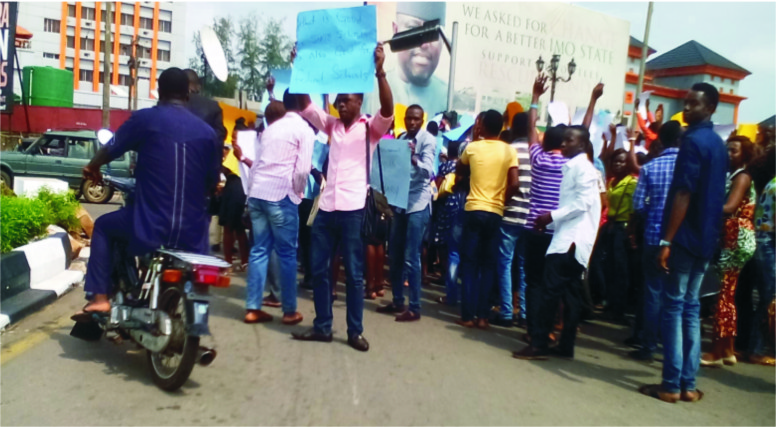 A frontline group under the aegis of concerned youths of Ohaji peoples forum on Thursday staged a peaceful protest over what they described as the inability of oil companies operating in Ohaji to contribute their own quota to the development of the host community.

In a chat with newsmen, the President of concerned youths of Ohaji peoples forum, Comrade Victor Kelvin Amadi said the essence of the protest is to raise alarm over marginalization, deprivation and the act of negligence meted on their community by the oil companies operating in their locality. He reiterated that 2 weeks back women and youths in the various communities in Ohaji has earlier protested what  he described as the insensitivity of the oil companies in Ohaji. Speaking on their agitations, Comrade Amadi said “in Ohaji we don’t have good roads, no functional health centre, no job opportunities, no skill acquisition centre, electricity, water and other infrastructures despite the huge income generated.

We have suffered enough, we have abundant food, rubber, gas and other natural resources but there is nothing to show for it. They even import workers to work in these companies, we are protesting so that we can get our rightful dividends” he submitted.

Comrade Amadi, in an emotion laden voice said if their demands are met they will leave the roads. He said the host community has written severally to the firms involved but to no avail, adding that the company were also reminded before the protest, but all fell on deaf ears.

The patron of the group, Comrade Okonji Daniel maintained that the youths of Ohaji are organized and not volatile as labeled before the leaders. He said efforts has been made to reach the appropriate authorities through writings with no positive response. Comrade Okonji revealed that oil exploration in Ohaji dates back to 1958. He maintained that shell petroleum has been in Ohaji, exploring the oil resources until they now have a dry well, adding that schools were built through community efforts. Comrade Okonji Daniel lamented, saying that “in the whole of Nigeria our locality is the only community in Nigeria with no electricity, health care services, but the German Government celebrates their Gas cluster” he submitted.

Comrade Okonji highlighted that successive governments from military down to the recent government, there is no trace of any developmental project in Ohaji.

In their respective speeches, the spokesman of the group comrade Duke-Bright Enyia, and Nze Jephta Okwudili, also made known that the oil companies operating in their locality has neglected them. Comrade Enyia said “we have about 8 oil companies operating in our land, but no hospital, school and other basic facilities, the site where the companies are located has good road, electricity and other infrastructure but the host community is suffering, our roads are death traps women die during childbirth, our youth not employed, they ask us if we are trained oversea and other ills, enough is enough” he said.

Lending her voice, the woman leader of concerned women of Ohaji peoples forum Mrs Scholastica Opara said “we are here to cry to the government, women has suffered, we are beautiful women but suffering is  too much on us, most women are graduates but no work, no roads to transport our produce, women die in the house during labour. God gave us oil but we are suffering, we don’t have power, the only thing we can do is to stay on the road for them” she lamented.