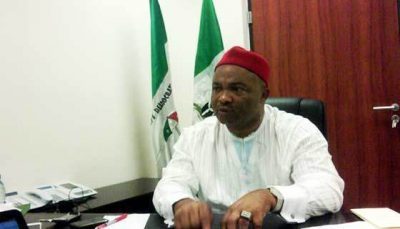 Despite not having any elective position or political appointment, at the moment, there is no gainsaying the fact that the immediate past Senator who represented Orlu zone and APC governorship candidate in the 2019 election, Senator Hope Uzodinma is a political idol that attracts many worshippers.
Six months he has become a private man and battling in court to upturn the election of Rt Hon Emeka Ihedioha as governor of Imo State, he is still attracted to followers.
This cult figure Uzodinma commands has manifested on his 61st birthday which political associates and loyalists couldn’t help but celebrate the politician fondly called Onwa Oyoko.
Uzodinma on Thursday Dec 12, added a year to his age to clock 61.
Interestingly, those who have political linage traceable to APC, especially those of the coalition, strongly opposed to the camp controlled by former governor Rochas Okorocha had.
The APC members led by the Caretaker Committee Chairman, Prince Marcel Nlemigbo, Senator Ben Uwajunogu and Rt Hon Goodluck Opiah in a message meant to felicitate with their candidate for the 2019 election, described Uzodinma as a “servant leader”.
Others whose names appeared in the line-up are George Eche, Prof Placid Njoku, Chief Charles Ories, Evan Mike Ikoku, Barr Chima Anozie, Chief C.O.C Akaolisa, Chief Cosmas Iwu and Barr Nnamdi Anyachie.
Also not left out among the leader are Chief Charles Amadi, Rex Anunobi, Ugochukwu Nzekwe, Chief Lemmy Akakam and host of others too numerous to mention.