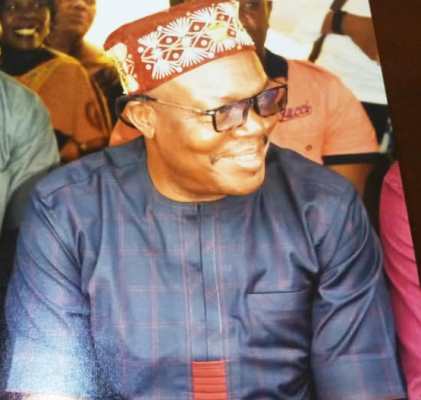 Honourable Chief Mike Anyanwu, a former chieftain of the Peoples Democratic Party (PDP) in Ahiazu Mbaise Local Government Area of Imo State and Special Adviser to the Executive Governor of Abia State on grassroot mobilization has defected to the All Progressive Congress APC.

The development was officially made known during a declaration ceremony held at Chief Mike Anyanwu’s country home, Nnemere Mpam, which coincided with the meeting of the Oru Na lude ward where multitudes also declared to the ruling party.

Speaking with newsmen at his country home, Chief Mike Anyanwu commended APC members for coming to witness the declaration ceremony, adding that the efforts of the party men towards catalyzing development influenced his decision. He pledged allegiance to the All Progressives Congress, APC and also vowed to bring his political weight to bear in grass root development.

Chief Anyanwu also said, “Ahiazu have suffered a lot, especially Mpam. We were supporting PDP but there was nothing to show for it. Before now Emeka Ihedioha came for the Governorship from Mbaise. At the end of the day, he ruled for eight months, he failed at the Supreme Court. We looked front and back, brain storming on the best way forward, so we decided to join APC, with Honourable Sam Otuibe at the forefront”.

The former PDP stalwart said Ahiazu Mbaise Local Government party men unanimously agreed to join the moving train. He explained further saying, “we resolved to work for APC,  it is better we start now. We are looking forward to see more decampees from All Progressive Grand Alliance, APGA , PDP and other parties. Ahiazu APC has set the pace, after here it will go round the 27 LGA.

The renowned grassroot developer, Chief Anyanwu urged Ahiazu Mbaise APC faithful to work with one mind, noting that their efforts will ensure that the government of Senator Hope Uzodinma succeed. He said his family and his community has vowed to remain APC faithful.

In his speech, Honourable Sam Otuibe, member representing Ahiazu Mbaise state constituency at the Imo State House of Assembly, lauded Governor Hope Uzodinma for appointing deserving sons and daughters of Ahiazu to laudable positions in his administration, a fit the previous government did not attain.