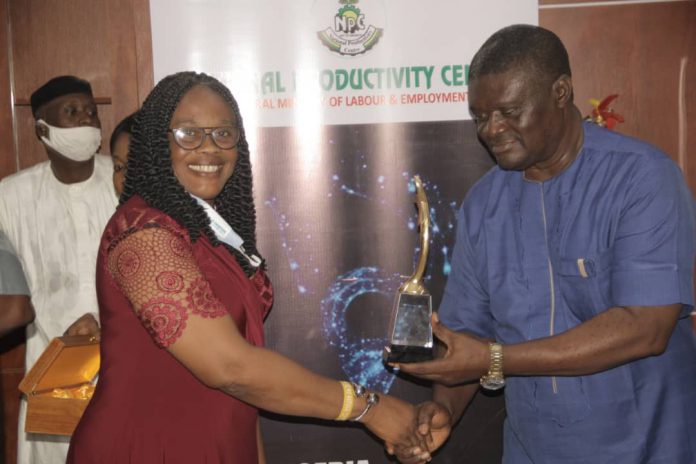 The Director of Sport Imo State Sports Commission, Mrs Chizotam Agboma Aretola has appreciated the “Shared Prosperity” government of Gov Hope Uzodinma following her emergence as one of the recipients of the national Leadership & Productivity award.
Reacting to Trumpeta Sports desk shortly after her return from Abuja where along side many others she was honoured by the National Productivity Centre NPC, in conjunction with Leadership Professional Ethics Consult  LPEC, with the award of Excellence in Leadership and Productivity,  Mrs Aretola said her gratitude after God goes to the state government who approved her nomination for the award promising to double her efforts in ensuring that the trust reposed on her is not in vein.
While also thanking the State Head of Service, Mr Iwuagwu Chibuzor for recognizing her efforts and contribution in public service, she equally lauded the Commissioner for Sports, Youth & Social Development, Hon Dan Ogu  over the cordial relationship that has existed between the Ministry and the Sports Commission making the envroment condusive for work.
The former National Volleyball team captain meanwhile, has dedicated the national award to the dedication and selfless efforts of the Management, Staff and Athletes of Imo State Sports Commission noting that the commission has been repositioned to ensure that the 3R mantra of Rehabilitation, Recovery and Reconstruction is well actualised through sports.
Ahe  added that with adequate support that the state athletes are poised to perform well at the National Sports Festival which was recently shifted to January 3rd, 2020.
Mrs Aretola alongside many others last Wednesday in Abuja were given the merit award for their contributions to public service