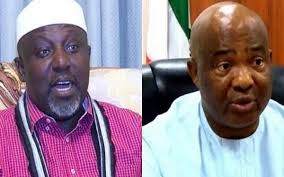 Imo State Governor, Senator Hope Uzodinma is not leaving anything to chance in a bid to expose how former governor Rochas Okorocha managed the affairs of the state in the eight years he was in charge.
Uzodinma has been exchanging verbal attacks with Okorocha with each trying to expose the inadequacies of the other in recent times.
Speaking on how his predecessor handled the finances of Imo State, Uzodinma told the Nigeria Union of Pensioners, NUP who paid him a visit how Okorocha allegedly transferred Bailout fund to Bureau De Change operators.
According to him, “the bailout funds were transferred to Bureau de change, dollars sold to the people, most of the monies we can’t see what it was used for”.
He also explained that there have been some delay in clearing the pension arrears in the state due to how the initial bailout fund was managed.
Still on Okorocha, Uzodinma further revealed how the former governor has been operating to stop the recovery process through by instituting not less than 120 court cases against his administration.
Uzodinma said that such cases were only meant to stop the recovery process his administration is doing to return lost property of the state.