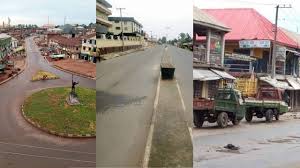 Activities across Imo State, with more emphasis in Owerri metropolis have continued to suffer setback over the fresh reinforcement of the sit-at-home order issued by the Indigenous People of Biafra, IPOB.

Recall that IPOB through its spokesperson, Emma Powerful had few weeks ago suspended the proposed Mondays sit-at-home in the South East States of Igboland.

Shortly after the announcement, people went about their Monday businesses without any fear of attack or harassment as may have characterized the earlier compliance to the sit-at-home order.

While it lasted, Trumpeta newspaper gathered that neither schools nor business outlets operated yesterday for fear of the unknown.

It would be recalled that last two weeks, some schools in Irete in Owerri West LGA of the State and few others situated in the heart of Owerri were reportedly forced to shut down before the official school closing hour.

Reason was an occasion of  gunshot and aimless run by both teachers, students and resident of the affected places.

However, yesterday witnessed a water tight sit-at-home around Imo State. Neither commercial nor private schools operated, as well as business outlets.

Trumpeta roving reporter who also monitored compliance to the sit-at-home observed that movement of persons and vehicles were skeptical.

The aforementioned axis were basically deserted like grave yards, except for few persons that were seen moving while observing security consciousness.