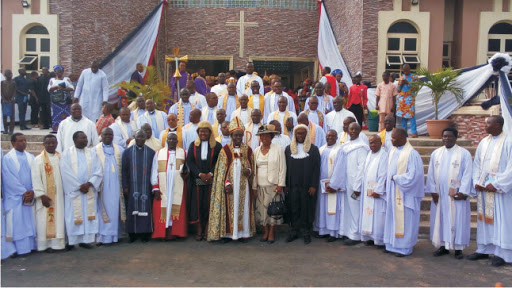 The November 13th Event will be the fourth Anniversary of the annual gathering of Leaders of Owerri Zone extraction across all political parties, Professions and callings.

As usual the Event will hold at All Saints Anglican Cathedral Egbu, in Owerri North LGA.

According to the Organizing Committee of the Event, this year’s theme is; Imo: Nmegbu Adighi Nma”.

The chairman of the occasion will be Gen Collins Ihekire (rtd). The Chief Host is the Senator representing Owerri District, Senator Ezenwa Francis Onyewuchi, Special Guest of Honour is the immediate past Governor of Imo State, Rt Hon Emeka Ihedioha, while the Guest of Honour is Senator Samuel Anyanwu (SamDaddy) the National Secretary- elect of the Peoples Democratic Party, PDP.

The occasion which is expected to kick off by 9am on November 13th, 2021 will be attended by a deluge of Imo citizens across the State, who love equity, peace and justice.

The annual Event has turned to an Intellectual and Political  ritual where mostly people of Owerri zone brain storm on the position of Owerri zone in the political equation of Imo State as regards power rotation among the three political zones that make up Imo State, namely: Okigwe, Orlu and Owerri.

Political pundits believe that Owerri zone has been marginalized in the power sharing in the State, based on the persons and times the zone has held the position of Governorship.

Since 1999 the current democratic dispersion berthed, Owerri zone who has played a good host to all Governments in the State as the owners of the State capital city has carried the Can.

While Okigwe zone has governed Imo State for four years through Governor Ikedi Ohakim, Orlu has monopolized the position by doing  eight years through Chief Achike Udenwa, another Eight years by Owelle Rochas Okorocha. The same Orlu is in power today through Senator Hope Uzodinma making it a total of twenty years for Orlu when Uzodinma completes his first tenure in 2024.

Pathetically, the only time Owerri zone won the seat in 2019 through Rt Hon Emeka Ihedioha, the position was snatched away from the zone by Orlu/Uzodinma after seven months through a controversial legal pronouncement that has dogged Nigeria Judiciary till date.

Therefore, Owerri zone is calling out her sons and daughters on November 13, 2021 to troop out and join hands as the Zone yet again peacefully, legally and constitutionally shout out to the world over the marginalization that is meted out to her in the political scheme of things in the State, with the belief that injustice any where is injustice everywhere.

The theme, “Nmegbu Adighi Nma” means that “Treat us as you treated others and there will be equity, justice and peace.” This is the clarion call from Ndi Owerre Zone that will restore justice in Imo and eradicate the feeling that some people are more superior to others in the State’s power sharing.