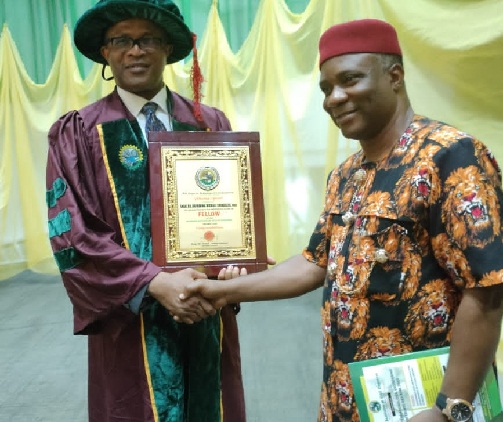 The award-winning Rector of the foremost Federal Polytechnic Nekede, Engr. Dr. Michael Arimanwa, has bagged a prestigious award as Fellow of the Nigerian Institution of Civil Engineers (FNICE). The event which took place last Thursday at the Executive Hall of the International Conference Centre, Abuja, attracted the who-is-who in the engineering profession in Nigeria.

The Rector, who is a Fellow of the Nigerian Society of Engineers, earned the award based on his enviable track record of excellence in the engineering profession, having earned both his M.SC and Ph.D in Structural Engineering. The Polytechnic chief has also contributed immensely to the development of the Engineering profession through varied high-tech services and internationally acclaimed academic articles and conference papers published in high impact factor journals.

A winner of so many Fellowships in the engineering profession, Engr. Dr. Michael Arimanwa only two months ago bagged the Fellowship of the Nigerian Institution of Water Engineers, an award extended to him for his prodigious commitment to the development of Water Engineering in Nigeria. Meanwhile, the cerebral Rector and academic only last month received a remarkable award as best Rector.

While decorating the Rector with the Fellowship Award in Abuja, the National Chairman, Nigerian Institution of Civil Engineers, Engr. Dr. Jang C. Tanko, stated that the Fellowship of the Institution is one of the highest ordinances of the organization, charging awardees to take the gesture as a call for higher responsibility in the engineering profession.

Among the tens of institutions under the Nigerian Society of Engineers, the Nigerian Institution of Civil Engineers has a remarkable streak of prestige and cachet. Those conferred Fellowship of the Institution are carefully selected with strict regard to their track records of credibility.

This award on the Rector, Engr. Dr. M.C. Arimanwa, is a glowing testimony of his uncommon commitment to his engineering calling, a devotion that has not been vitiated by his phenomenal role as Rector of a prestigious Polytechnic which had been rated best-performing by the National Board for Technical Education. The most favourabe disposition which the Rector has given to Engineering Studies at the Federal Polytechnic Nekede is outstanding. He has ensured that all engineering workshops and laboratories are well-equipped so that the institution would produce experts that can compete favourably with their peers anywhere in the world.

It was the uncommon commitment of the Rector to the engineering profession that gave birth to the electric car recently produced by the institution. The leader of the team that invented the car, Engr. Pius Nwosu, has acknowledged that without the commitment and support of the Rector to the vehicle project, his team would not have succeeded in the venture.

Meanwhile, the Rector had while receiving the Fellowship Award pledged that he would embrace the vision of the Institution of Civil Engineers by making it a world renowned body which will be a pride to all Civil Engineers in Nigeria.

Married to an Associate Professor of Civil Engineering, the Rector practically exudes engineering through and through. It did not come as a surprise, therefore, that his beloved wife, Engr. Dr. Joan Arimanwa, was also a noble recipient of the Fellowship Award. Thus, the Rector and his wife broke records at the epochal event by being the only couple invested with the prestigious award.

The occasion was chaired by Engr. T.S.G. Wudil, President of the Nigerian Society of Engineers, while Prof Suleyman O. Adeyemi (former V.C., FUT, Minna) was the Guest Speaker in a lecture entitled “Solid Waste Management, An Imperative for an Emerging City Development: Abuja FCT in Focus.” Mr. Uche Orji of the Sovereign Wealth Authority Abuja, served as the Keynote Speaker while the Chief Host was Mal. Muhammad Musa Bello (FCT Minister).