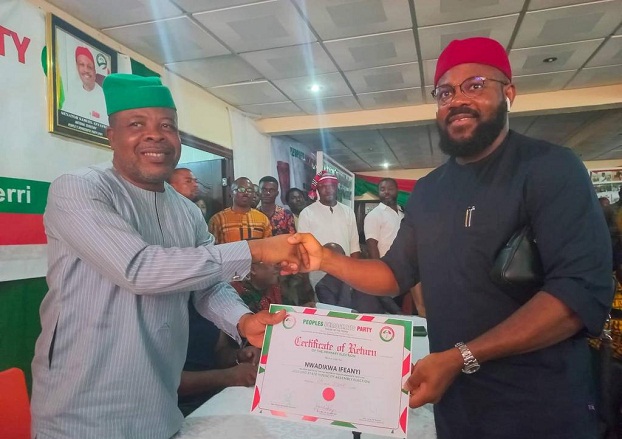 The presentation was made by the State party Chairman, Engr. Charles Ugwu at the state party secretariat along the Okigwe Road, Owerri.

In his address immediately before the presentation of Certificates, Engr. Ugwu congratulated Nwadikwa and other candidates, and charged them to give their best in ensuring that the party emerges victorious in the forthcoming elections.

Also felicitating with him, the former Governor of Imo State, His Excellency,  Rt. Hon. Emeka Ihedioha who graced the occasion with his presence enjoined the candidates to be gracious in victory, and work even harder to secure victory for the party across the 40 legislative seats.

He assured the candidates of the party’s maximum support, while urging them to exhibit loyalty and commitment to the party. He expressed satisfaction with the conduct of the just concluded party primaries, noting that it is one of the best he has witnessed.

Fielding questions from newsmen after the event, Hon Nwadikwa Ifeanyi gave God the glory for flying the PDPs flag for the 2023 polls.

While also thanking the party Leaders from the National, State, to the LGA and Ward levels, he thumbed up for the delegates, even as he assured them of better days ahead.