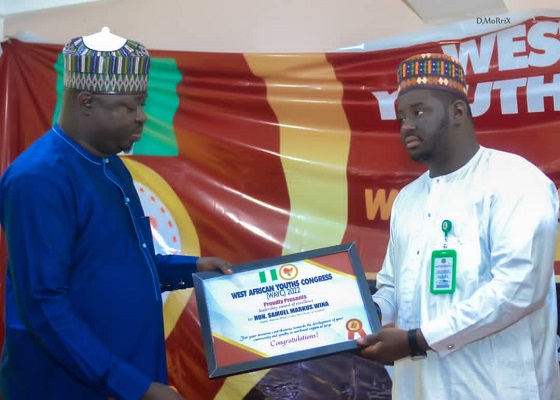 Kindness, generosity and good work has earned a fresh recognition for the Lawmaker representing Pero-Chonge State Constituency (Shongom LGA) in the Gombe State House of Assembly.

Following his effective representation and pro-activeness in human relation,
the West African Youth Congress has given an award of recognition to Hon. Samuel Markus Wina.

Presenting the award, the Executive Director, North-East Youth Initiative for Development, and Chairperson Youth Network for the Lake Chad Region, Amb. Dauda Gombe, commended the efforts of the lawmaker for being a voice of the youth and a catalyst for positive change in the state.

He said his laudable achievements in both human and youth development are insurmountable.

Receiving the award, Hon Wina charged youths to put in their best wherever they find themselves.

He noted that the nation is currently being built by youths, through conceiving and implementing ideas towards building the nation, he however pointed out sadly that the ongoing crime, banditry and insurgency is currently perpetrated by the youths.

Making a call to action, the Honorable Member cautioned youths, “they should avoid the make-it-quick syndrome and trust in God, while giving their best to the society.”