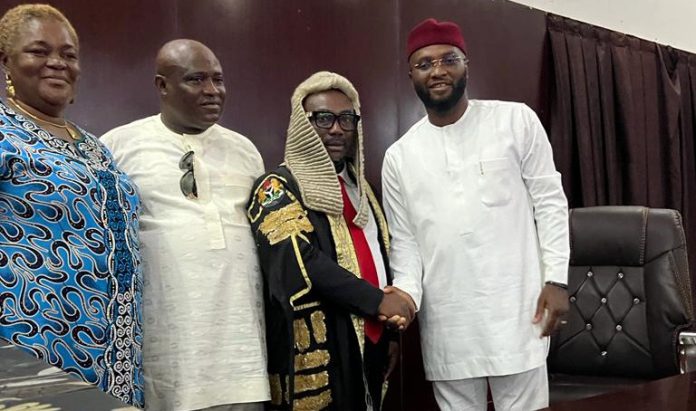 The people of Imo State at mid-day of Monday, September 19, 2022 were surprised over  the news of the emergence of a new Speaker of the State Assembly, Rt Hon Emeka Nduka, who represents Ehime Mbano State Constituency.

Nduka emerged, following the said resignation of the former Speaker, Barr. Kennedy Ibeh who only held sway for a period of ten months.

Although people have their  reservations concerning the pattern and processes that ushers in new Speakers, especially by producing the 4th Speaker within the 3rd year in the same  dispensation, there are cheering news hovering around the latest Speaker from Ehime Mbano State Constituency.

In an avowed determination of keeping her esteem readers abreast of the happenings in and around the Imo State House of Assembly, Trumpeta Assembly Vibes brings to limelight some impeccable qualifications of the newly sworn-in Speaker.

It is of great importance to note that Rt Hon Emeka Nduka contested the 2019 Imo Assembly seat under the All Progressives Congress, APC. After the Election Petition Tribunal cases, he won his closest rival, a former House Member of the 8th House, Hon Lawman Duruji through the Appeal Court.

While majority of the members cross-carpeted to PDP and later to APC, Nduka was the only original APC person in the present House who held the APC’s official mandate.

Before his elevation as the number one Lawmaker of the present 9th House, he was the Deputy Majority Leader, a position he held with all sense of dignity and respect.

A sound Legal practitioner, the Rt Hon Emeka Nduka was an old Boy of a revered St. Peter Claver Seminary School, Okigwe. He later bagged a BS.c Hons in Government and Public Administration from Imo state University. He also bagged a second degree in Law from Imo State University, Owerri.

In 2016, after the successful one year course/ training at the Nigerian Law School, Nduka  was called to Bar, a profession he upholds its ethics and tenets  till date.

Still on memory lane, he contested and won the Councillorship election of his Nzerem/Ikpem Ward in Ehime-Mbano LGA in the year 2000.

Haven carved a strong niche for himself, the soft spoken, compassionate and friendly Nduka was appointed the Coordinator of Oyibo-Mbano Development Center in 2011 by the then Governor of Imo State, Chief Ikedi Ohakim.

A devout Christian, a husband and loving father, Nduka’s ascendancy to the plum position as number three citizen of Imo State have many interpretations in the lips of his classmates at the Seminary and others who have come in contact with him.

His level of humility, as clearly testified by all and sundry, and his inborn leadership traits, one could say, speak more of him.

However, many expectations await his reign.