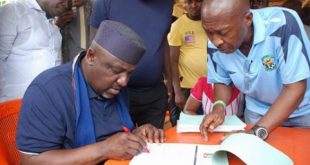 The National Industrial Arbitration Court sitting in Owerri, Imo State on Monday fixed 21st June ruled on a preliminary objection brought by the Imo State Independent Electoral Commission ISIEC chairman, Rt Hon. Amaechi Nwoha seeking to stop the State Government from relieving him of a tenured job as the chairman of ISIEC until legally removed from office and with his entitlements which he said have not been paid in the last four and half (4 1/2) years.

Hon. Justice. O .O Arowosegbe, the judge, in the matter with suit no: NICN/OW/15/2018, fixed the new date after listening to the submissions of all parties in the

The claimant, Nwoha who also was an ex- Speaker of Imo State House of Assembly, is asking the court for a declaration that the appointment of Mr Ethel Ibeabuchi as ISIEC chairman did not follow laid-down rules and on the above premise that “any action taken by him (Ibeabuchi) as commission chairman is illegal, null, void and of no effect”.

Also he is challenging his purported dismissal from a tenured office by the Imo State Government and other parties involved in the matter.

part of the reliefs sought by Bar Nwaoha is a declaration by the court that he is still the chairman of ISIEC until legally removed from office and until his entitlements which have not been paid in the last four and half(4 1/2)years are cleared.

At the resumed hearing on Monday, Counsel to the Imo state Government ,J. C Ibe Esq ,Acting Solicitor, Ministry of Justice made U turn on the out of court settlement she applied for earlier .

Barr. Ibe urged the court not to grant the prayer of the claimant that it was not properly constituted. She argued that Nwoha is not entitled to his claims because there was no such condition stipulated on his appointment letter, noting that the Court can’t look outside the document of contract of employment by relying on other peoples documents to take decision.

The lead Counsel to the claimant, Barr. Ken Njemanze SAN, in his submission argued that the case before the court was that of the claimant challenging his purported dismissal, tenure and termination of appointment and not document of contract of employment.

Njemanze urged the court to dismiss the preliminary objection of the respondents and grant the claimants prayers, saying that it was a ploy to further stall the proceedings of the case.

Nwoha had through his lawyer averred that he was wrongfully dismissed from a tenured office.