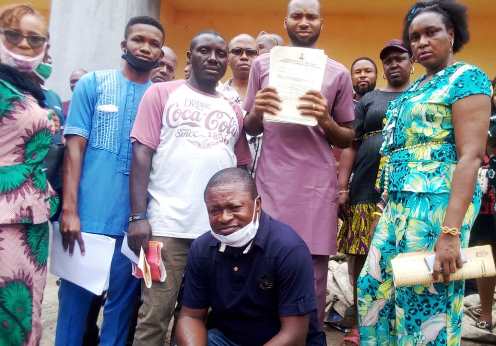 By Onyekachi Eze
The indigents and the physically challenged persons from Ehime Mbano Council Area, Imo State have heaved sigh of relief, following an acts of kindness shown to them by their House of Assembly representative.
Last Friday, the Honorable member representing Ehime Mbano in the State House of Assembly, Barr. Emeka Nduka extended hands of fellowship to the aforementioned persons, as a way of marking his birthday anniversary.
The occasion, Trumpeta Newspaper gathered was characterized with the dining and feeding of the poor, amongst other philanthropic gestures.
Top of the celebration was the sharing of palliatives to his Ehime Mbano constituents, as a way of cushioning the effects of the world’s ravaging coronavirus pandemic.
While Hon Nduka had the delight of cutting his birthday cake with his people, he thanked God for the gift of life granted on him for adding a year.
Similarly, his Umuoma Nzerem village kinsmen were not left out in the largesse, as they all rallied around him in solidarity, especially for his selfless services towards the promotion of humanity.
In furtherance, the soft spoken lawmaker reaffirmed his readiness in delivering democracy dividends, and effective legislation.
In a related development, members of the ninth House, third Assembly, led by the Speaker, Rt. Hon Collins Chiji were among the people that added glamour to the ‘social distancing’ oriented birthday bash.
The lawmakers did not only honour Hon Emeka Nduka with their presence, but also showered him with accolades as it regards his personality and contributions on the floor of the House.
However, there was “excuse me dance” session, coupled by the cutting of the birthday cake with his colleagues, held at De Angels Bar and grill, New Owerri.