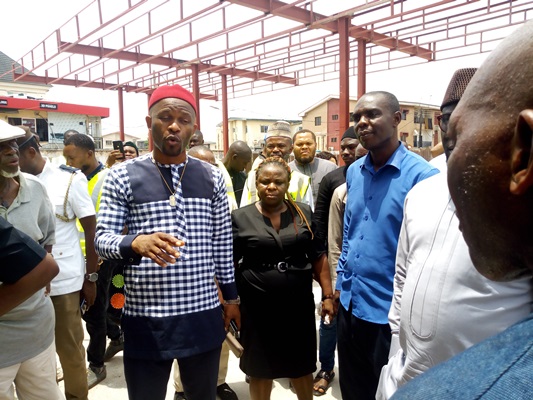 Members of the public, with emphasis on the esteemed members of Safari (A.I.F.C.E.S.S) Recreation Club, Owerri, Imo State, have been called to close ranks and give support to the Government of Imo State.

This charge was made by the General Manager of the Owerri Capital Development Authority, OCDA, Engr. Sir Innocent Ikechukwu Ikpamezie, during his Honorary membership investiture by Safari Club, on Sunday, October 17, 2021.

He pleaded that for there to be the desired change and development in the State, all hands must be on deck.

Engr. Ikpamezie argued that in no political history has it been heard there are two Governors at a time for a State, stressing that in Imo, there is only one State and one Governor, Senator Hope Uzodinma.

The OCDA boss informed them that so far, Governor Hope Uzodinma has shown capacity and sagacity by embarking on massive human, and capital development projects.

Ikpamezie opined that election days are over, while 2023 is yet to come, hence enjoined all and sundry to forget party politics and queue in with the present administration in delivering democracy dividends.

The soft spoken Engineer by profession highlighted that no State prosper with destructive tendencies and politics of hate. However, he asked Imolites to get it right by identifying with the Imo State Government.

Speaking on his award by Safari Club, Owerri, Engr. Ikpamezie thanked the Leadership and members of the Club for finding him worthy to be honored.

“I feel at home joining the Club. What we serve is humanity. Together, we will do it. For the fact that everybody interacts and mingles selflessly makes me feel relaxed”.

Ikpamezie also thanked God for giving him the opportunity and strength to serve Imo people, through the help of Governor Uzodinma. He retorted that his work so far may have led to the recognition by Safari Club.

The Mbaitoli born progressive promised to do more through the service of God and humanity.

It would be recalled that during their presentation, the President of Safari Club, Rt. Hon. Mike Iheanetu disclosed that the selection and award was overwhelmingly approved by the General Assembly based on track records of achievements, character, and accomplishments in the society.