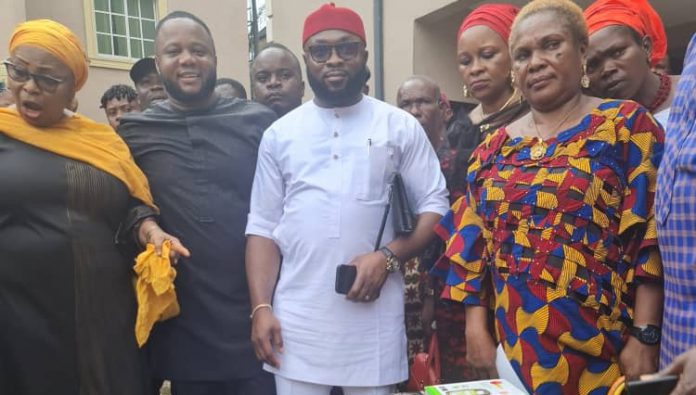 The 2023 Imo State House of Assembly candidate for Ideato North LGA, under the All Progressive Congress, APC, Hon Udeze Ernest Okechukwu has apparently won the heart of the people through his humane dispositions.

Across the length and breadth of Ideato North LGA, the new song on people’s lips is,
“Okey is Okay” anywhere you go.

In his usual manner of associating with people at the grassroots, Hon. Udeze Okechukwu is out to tour round all the villages of the LGA in this year’s 2022 new yam festivals.

In Igbo land, new yam cultural celebration is celebrated once every year in communities, led by the custodian of culture and traditions (the Traditional Ruler), as an event marking the official harvesting and consumption of new yam by the people.

The young politician was overwhelmingly welcomed by Dick ad Harry on arrival at the venue.

Aside receiving Royal blessings from the traditional institution of Isiokpo, he bagged endorsement of the constituents present, for identifying with the people in events of such magnitude.

Hon Udeze in his brief speech expressed delight for being in their midst once more, pointing out that new yam festival had been a long aged tradition which will never go into extinction.

Even as he clearly explained to them that he didn’t come for campaign until the official lift of ban by the electoral umpire, he came to be with them, dine and wine with them in such cultural activity.

Udeze disclosed that, his team will tour round all villages during the period of new yam festivities, and will be doling out different house appliances ranging from generator sets, solar rechargeable flashlight/lanterns, to mention but a few.

On the modalities for its distribution, he said, lucky raffle draw shall be conducted on-the-spot, and lucky winners to go home with one or two of the items for free.

Throwing more light, the APC IMHA flag bearer thumbed up for the State Governor, Senator Hope Uzodimma for his massive human, capital and infrastructure development in the State.

Udeze didn’t fail to restate his appreciation to the Governor for recently awarding the reconstruction of the Orlu-Akokwa Road.

According to him, Imo State had Governors in the past, but now, a viable and more proactive Governor under Uzodimma, who only sleep and wake up thinking about the welfare of the citizenry.

“Okey is Okay” seized the opportunity to drum support for the 3R government, by calling on the masses to close ranks and come together for the overall interest of the State.

Hon Udeze reiterated his unalloyed support and loyalty to the governor, the APC National, State and LGA leadership and her esteem members.

The elated people of Ideato North who couldn’t hide their satisfaction over the candidature of Udeze described him as a round peg in a round hole, a technocrat, and sure bet for Ideato North House of Assembly come March 2023.

In a similar note, line up of villages to be also visited by “Okey is Okay” in celebration of the new yam festival with raffle draw are as follows;
August 4th, 7th, 10th, 14th, 26th, 27th will be the turn of Akpulu, Obodoukwu, Osina, Urualla, Uzii, Umualaoma, Akokwa, Akokwa, respectively.