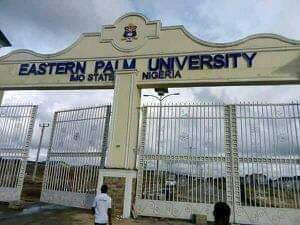 By Okey Alozie
The Commissioner for Education Imo State, Prof B.T.O Ikeagwuoha has disclosed that the State Government under Governor Hope Uzodinma has finally taken over Eastern Palm University from Owelle Rochas Okorocha former governor of Imo State.
He disclosed that the University matriculation could not hold adding over 105 police men were detailed by the Commissioner of police to luck up the place and make sure that it is completely shut down.
In his words “Right now the University belongs Imo State”.
The Commissioner made this submission in Ozisa 96.1 Radio FM Wednesday morning.
Speaking further Prof Ikeagwuoha maintained that who so ever owns the land also own the buildings in it, adding that Okorocha used Imo State money to build the University for his own use.
Ikeagwuoha who was very dramatic during the radio programme on Wednesday regretted why Okorocha should consider himself as an Emperor and use Imo money to build such a private University at Ogboko his home town.
Some prominent Imolites who spoke on this issue praised the Commissioner and Governor Hope Uzodinma for taking such a bold step adding that nobody is above the law or bigger than the State.
Some students from Easter Palm University Ogboko who reacted sharply on the University issue said the Commissioner did not say the truth of what happened.
The students revealed that they matriculation took place in the University on the stipulated date and the University was not shut down as claimed.