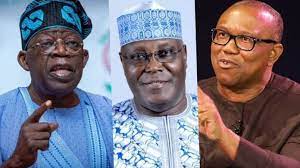 As part of efforts geared towards ensuring a rancor free and violent free elections across the 36 States of Nigeria in 2023, the Presidential candidates of all political parties have signed the compulsory Peace Accord.

The signing of the documents which took place at the International Conference Centre with the ICC Abuja yesterday recorded the attendance of all Presidential flag bearers exception of the APC candidate, Bola Ahmed Tinubu.

Tinubu’s absence in the important event sparked off worry among the attendees and Nigerians who queried his whereabouts.

Rather, the running mate, Keshim Shettima  represented him.

On the contrary, other flagbearers like the PDP’s Alhaji Atiku Abubakar, the Labour Party candidate, Mr Peter Obi, Rabin Kwankwaso of the New Nigeria Peoples Party NNPP were all present.

Indications were rife that before then, Tinubu was allegedly jetted out of the country to far away London, the United Kingdom.

It was said that due to his health grounds, the APC heavyweight who has the party’s ticket for 2023 travelled to UK.

The signing of the Peace Accord was held a day after the official commencement of the campaigns.

It was organized by the National Peace Committee headed by former Head of Staff General Abdusalami Abubakar, His Grace, Cardinal John Onaikan, among other Nationalists.