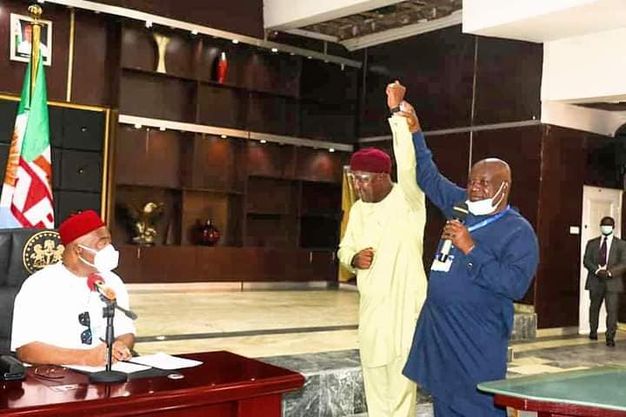 Chief Matthew Omegara,  a former member of the House of Representative and immediate aide to late Sen. Benjamin Uwajumogu has told a Federal High Court sitting in Port Harcourt,  the Rivers State capital that Chief Frank Ibezim did not win the Imo North senatorial primary of the ruling All Progressives Congress held early this month.

It would be recalled that Chief Frank Ibezim had alleged that he won the primary Conducted by the ruling party to select a candidate for the October 31 senatorial election to fill the vacant post following the death of Sen. Benjamin Uwajumogu.

However,  it later emerged that Chief Ibezim,  alleged to be enjoying the backing of the Imo State Governor as well as that of the Minister of State,  Education, had been disqualified by the screening committee set up by the party to interview the aspirants on the grounds that he did not present valid certificates contained in the various forms he submitted.

But rather than abide by the outcome of the two committees,  one of the aspirants ran to the Federal High Court,  Port Harcourt to seek an injunction restraining the APC from submitting any other name other than that of Ibezim to the Independent National Electoral Commission,  INEC.

Sen. Ifeanyi Araraume who was declared winner and who studiously went through the rigours of the screening committee and emerged clean, however filled an affidavit to be joined in the matter as an interested party.

The judge having heard from all the parties refused to grant the relief, but rather ordered that the status quo be maintained by both the APC and INEC pending the determination of the matter.

Omegara, who was also disqualified by the screening and appeal committee, also approached the court as a party to the case was also listed as one, while further hearing was adjourned to October 21, even as it ordered all parties to immediately serve all documents relating to the case to all the parties concerned and that all briefs should be consolidated before the next adjournment.

The brouhaha orchestrated by the poll had divided the ruling as the gladiators had vowed to pursue the matter to its logical conclusion.

Meanwhile, another round of trouble is about to resume in the Imo State chapter of the All Progressive Congress, as protesters numbering more than 1,000 drawn from different parts of the six geopolitical zones that make up Okigwe zone on Tuesday stormed Owerri, the state capital to demand for the official naming of Araraume as winner of the party’s senatorial contest conducted on September 3rd, 2020.
Though clearer pictures of what Araraume sought for in court have not been gotten by this newspaper as at the time of going to press since the case came up at a Federal High Court in Porthacourt, on Wednesday, but legal professionals close to the two time Senator of Okigwe zone disclosed that he went to court to seek redress concerning the result of the primaries.
Reports have it that instead of Araraume’s name, that of Frank Ibezim was what appeared before INEC.
Araraume is therefore asking that he be declared the flagbearer of the contest based on the outcome which saw him emerge winner. The protesters from Okigwe zone who stormed Government House and INEC office on Tuesday protested the outcome of the congress where APC is said to have submitted Ibezim’s name.
According to the protesters through their spokesperson, Raymond Aguguo, the people of Okigwe zone are asking that the Senator be handed the ticket of the APC based on the outcome of the primaries.
They alleged that Ibezim is not qualified adding that he was not only rejected by the screening and Appeal committee during the conduct of the primaries but also does not have relevant qualifications to stand the election.
Stating further reasons for the protest the crowd who were barricaded by police to gain further moved towards Government House, disclosed that the wish of Okigwe zone is to have Araraume and not Ibezim propelled by political Godfathers adding that attempts to impose one disqualified to stand primaries and without verifiable certificates cannot be imposed on the people.
The protesters further warned that it wouldn’t be an easy ride for Ibezim and agents to have their way in the contest considering the political prowess of Araraume.
While there was security barricade at Govt House, an official of the INEC addressed the protesters before the dispersed.