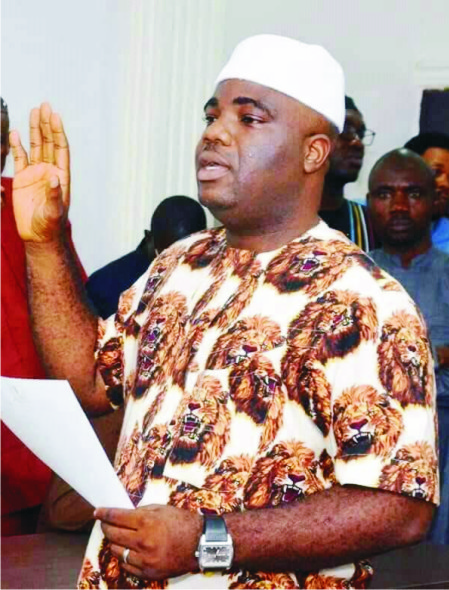 The leadership of Imo State chapter of the All Progressive Congress, APC loyal to the State governor, Owelle Rochas Okorocha is risking jail for conducting primaries for Chairmen and Councilors wishing to contest the forthcoming LGA elections in the State, reports Trumpeta.

It would be recalled that two major factions are battling for the soul of Imo APC. While the faction loyal to Okorocha is led by Daniel Nwafor, those of the Allied Forces are under Hilary Eke.

Trouble started when the Exco of Eke was sacked by the federal High Court in Owerri after it was inaugurated by the National Working Committee before the National Convention in Abuja.

Moments after the Convention ended in Abuja and a new leadership chaired by Comrade Adams Oshiomole came on board after that of Chief John Oyegun, a new congress for Imo State was organized despite the other group led by Eke heading to Appeal Court to challenge the decision of the appellate court.

The new congress led to the emergence of Nwafor, who after days of delay has been inaugurated by Oshiomole.

Further to the inauguration, was the recent conduct of LGA primaries for Chairmanship and Councillorship candidates ahead of the elections slated for ending of this month.

Trumpeta learnt that the Nwafor led Exco is working against the decision of a Federal High Court which sat in Abuja and restrained the Okorocha faction of parading and barring INEC from conducting any primary election or anything in like manner in the State pending the determination of suit before it.

In contrast to the order, the Nwafor committee has gone ahead as the parties were asked to maintain status quo until August 21, new date for hearing.

The Federal High Court under a vacation Judge, Justice Babatunde Quadri gave the order following an Application by Ahmed Raji (SAN) counsel to the plaintiffs, which comprised Senators Osita Izunaso, Ben Uwajumogu, and Mathew Omegara. Others are Hilary Eke and Patrick Uzoukwu.

Raji (SAN) has asked the court to order that all parties be restrained from conducting any primaries in the State, Ward and Local Government until the next adjourned date of the suit.

He said that if such an order was not made and the dependants went ahead to conduct the primaries before the next adjourned date, the suit would become an academic exercise.

The learned counsel further told the court that “although the Defendants (members of the Okorocha faction) were duly served with an order of court stopping them from conducting congresses on July 20, they went ahead to conduct the congresses.

Raji argued that consequently on July 23, the plaintiffs filed a motion ex parte praying the court to set aside the purported congresses.

Responding, counsel to the Defendants, Mr Oladipo Okpeseyi (SAN) who told the court he has just been briefed about the matter, pleaded for adjournment to enable him file the necessary processes.

Justice Quadri in a short ruling, ordered all parties in the suit to maintain status quo and not conduct any primaries until the next adjourned date.

“All parties are restrained from conducting any primaries in the State, Ward or Local Government until Aug 21. A cost of N10,000 was awarded against the Defendants for not filing their processes within the stipulated time and adjourned the matter until Aug 21 to allow the defendants regularize their processes.

In spite of the order of the Judge after making representations, the Okorocha faction went ahead to conduct primaries.

This newspaper gathered that the action of the Nwafor led APC in Imo may be the subject when the next hearing comes up on Aug 21, 2018.