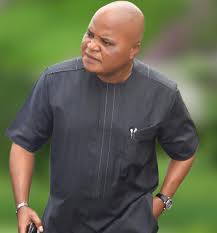 As electioneering season sets-in ahead 2019 general elections with political parties marshalling out guidelines to elect their candidates, reports brewing has it that a major player in the coalition forces of the All Progressive Congress APC in Imo State and two time Senator of Okigwe zone Senator Ifeanyi Araraume has concluded his move to the All Progressive Grand Alliance APGA and he is set to buy Guber Form.

Trumpeta Newspaper reliably gathered that Senator Araraume’s supporters had earlier joined APGA with his Destiny Organisation campaign structure from the ruling party as he was absent during a meeting of APC stakeholder last Sunday, 9th September, 2018 comprising of members of the Allied Forces in Owerri.

This Newspaper also authoritatively gathered that the new catch of APGA, Senator Araraume will soon pick APGA gubernatorial form to further buttress his intent to becoming Imo State Governor in 2019. Similarly, stakeholders of APC, prominent in the political scene are also joining APGA to actualize their political ambition in 2019.

It would be recalled that Trumpeta had earlier revealed the plans of the Senator to join APGA. Arrangements were concluded last weekend where APGA national officers and leaders in Abuja met with the Araraume and his team comprising Senator Osita Izunaso, Nze Elvis Agukwe and Okey Ikoro to put finishing touches before the defection.

Reliable sources also have it that Araraume supporters have been asked to conclude their APGA membership, as the Senator is scheduled to pick guber form before the end of today. It was also gathered that sale of nomination forms for governorship was extended in APGA for the Senator to join the governorship race.

It could be recalled that Governor Okorocha’s personal interests and decision, imposing candidate for political offices against the wishes of most APC bigwigs and members gave rise to the Coalition Forces who were working against the Governor’s decision. These gave birth to a parallel state APC Chairman, SWC and Executives at the 27 LAGs.

Recently, Governor Okorocha last Saturday at Ahiajioku center told Imolites not to vote for his Brother-in-law, Engr Chuks Ololo and the SGI, Sir George Eche who also declared his interest to via for the Imo Guber seat.