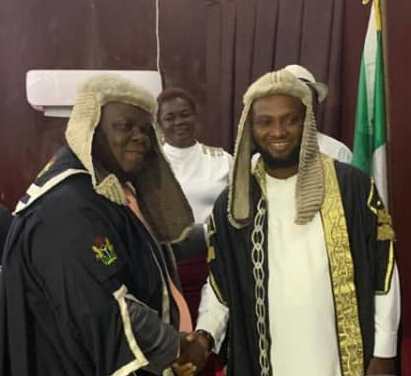 By Onyekachi Eze
The long awaited emergence of the Deputy Speaker, Imo State House of Assembly has been concluded, 3 months after the resignation of the former, Okey Onyekanma, but not without the expected interesting drama associated with such exercise.
The Speaker, Collins Chiji has been working alone without the assistance of a deputy, resulting to an election among the legislators which produced the member representing Nwangele LGA, Amara Chyna Iwuanyanwu as the Deputy Speaker of the 9th House.
Iwuanyanwu was voted in as a consensus candidate, after the member representing Isu State constituency, Ngozi Obiefule and her Ideato South counterpart, Johnson Iheonukara Duru nominated and supported him, respectively.
In the absence of counter nomination, Rt. Hon. Amara Iwuanyanwu was declared winner and immediately robbed.
However, feelers have it that the emergence of Iwuanyanwu may not be unconnected to the governor’s old PDP connection. Uzodinma like the deceased Iwuanyanwu were soul mates of the old PDP.
Many believed that as a son of the deceased politician, the best compensation Uzodinma would give is making a clear way for younger Iwuanyanwu to become the number two person in Imo Assembly. The Governor was also said to have favoured Iwuanyanwu because of his age and years in politics. Instead of banking on those with political lineages to other camps, Uzodinma went for the youthful politician from Nwangele LGA who is said to have replaced him in the political business.
However, all seem not to be okay among some of the lawmakers tipped for the offices of the Deputy Speaker  like the Majority Leader, Chief Whip and Deputy Chief Whip, now occupied now by Amara Iwuanyanwu (Nwangele), Uche Ogbuagu (Ikeduru), Arthur Egwim (Ideato North), and Eddy Obinna (Aboh Mbaise) respectively.
Most of them who spoke to Trumpeta Newspaper without wanting their names mentioned expressed disapproval to the manner the Deputy and Principal Officers emerged. They expressed that democratic process was lacking.
How the Nwangele lawmaker emerged remains a mystery for members from Orlu zone, especially where ranking members are involved.
For the seat of the Majority Leader, it was queried that since the deputy governor is from Ikeduru LGA, the majority leader should have shifted to another local government in Owerri zone and of APC extraction.
Trumpeta noticed that the aggrieved lawmakers wore forlorn looks to express their annoyance.
Meanwhile, the Speaker, Rt Hon Collins Chiji has maintained that the present 9th House is committed to making cogent laws for the good of the State and their constituents, and not to fight either themselves or the governor.
Chiji made this assertion while fielding questions from newsmen after Tuesday’s plenary session in his office.
While enjoined the new principal officers and by extension, all the lawmakers to go by their legislative activities diligently and with the fear of God, said they are not in any way going to have a log ahead with the executive.
Narrating how the officers emerged, Chiji said those elected followed due process, and the appointment was consented by the State chapter of the All Progressive Congress, signed by the Chairman, Prince Marcellinus Nlemigbo.
“For clarity, people were not induced, the house is composed of 10 principal officers, the speaker and 9 others”.
“All the members are qualified to occupy whatsoever position. I can work with anybody, I am not in particular of any candidate”.
Speaking on dissolution of standing committees, the speaker said it is under his jurisdiction to do so, at the appropriate time, noting that so far, there is no need for that unless for 2 or 3 committees specifically made for some particular principal officers.