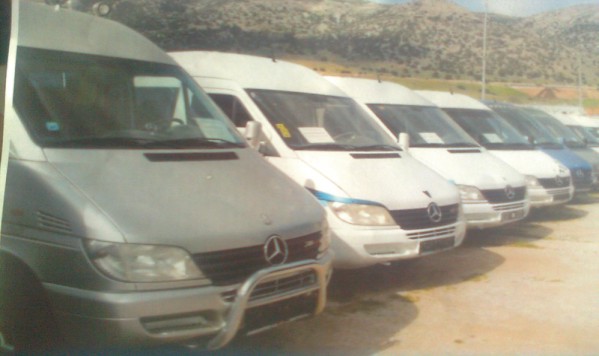 Members of the Heartland FC Colombia Supporters have lauded Governor Hope Uzodinma for donating 2 brand new buses to their group and Heartland FC Fans Club.
Speaking to Trumpeta Sports Desk during the clubs evening training session on Tuesday, Vice Chairman of Colombia Supporters, George Emenyonu “E -dey Work” described Sen Uzodinma as the best thing that has ever happened to their darling club especially the supporters groups noting that he is the first Governor who has ever donated a vehicle to the Colombians.
“E -dey Work” who was seen visibly seen  cheering the players for their victory against Akwa United said the gesture will spire them even support the players and the management team greatly.
They equally thanked the Deputy Speaker Imo State House of Assembly, Rt Hon Amara Iwuanyanwu and the Sports Commissioner, Hon Dan Ogu for their commitment to ensure that the club and the supporters are well taken care of.
Meanwhile, the Colombian supporters have pledged their unalloyed support to the General Coordinator of Heartland FC, Mr Promise Nwachukwu to enable him rekindle the feet which saw Heartland FC clinch the FA Cup (now known as Aiteo Cup) back to back in 2010/11 and 2011/12 season.
The Colombians who made this declaration through their Vice Chairman, George Emenyonu “E -dey Work” maintained that Mr Promise who was then the Team Manager of Heartland FC under Chief Fan Ndubuoke has  what it takes to make the club achieve those glorious days with the necessary support.
He said Promise haven played the game and worked under seasoned administrators such as Chief Ignatius Okeahialam, Emeka Iwuagwu and Fan Ndubuoke achieving success that he can repeat the feet as the clubs General Coordinator Woking closely with the General Manager, Hon Ifeanyi Chukwudi, the Deputy Speaker, Rt Hon Amar Iwuanyanwu, the Commissioner for Sports, Youth & Social Development, Hon Dan Ogu as well as the Management Committee.