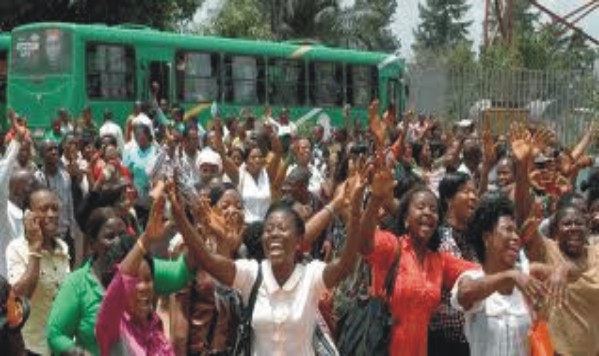 Even as the dust raised by the sacking of the beneficiaries of the 10,000 job scheme by the Owelle Rochas Okorocha administration is yet to settle, a government body, the Imo State Traffic Management Agency, IMSTMA, is collecting the sum of N1, 500 each from prospective applicants seeking to be employed into various vacancies existing in the establishment.

The Imo state House of Assembly recently passed a Bill into law for the establishment of the IMSTMA, prompting the new agency to advertise for vacant positions and among other things request prospective job seekers to pay the sum of N1500 to a particular bank in the State (names withheld) before application and consideration.

In a paid advert in some Owerri based tabloid, IMSTMA requested the applicants to pay a sum of N1500 into the bank account before collecting the application forms which are the license to be qualified for other screening and aptitude tests.

Some of the job seekers who spoke to Imo Trumpeta on the issue disclosed that they were forced to part with N1500 which they paid into an account before getting the application forms.  The applicant who was one of the victims of the 10,000 job sack noted that the Okorocha administration would have not subjected applicants to pay money for job application, taking into consideration what transpired with the 10,000 job beneficiary in the last regime.

Briefing newsmen in Owerri recently, the Chief Executive Officer of IMTMA, Don Linus Onwukaike, said that the new agency will begin operation in June adding that it shall be responsible for the control of traffic and maintaining of free flow of vehicular movements in the State.  Onwukaike said that able bodied men and women shall be employed for the purpose but kept mute on method of employment.