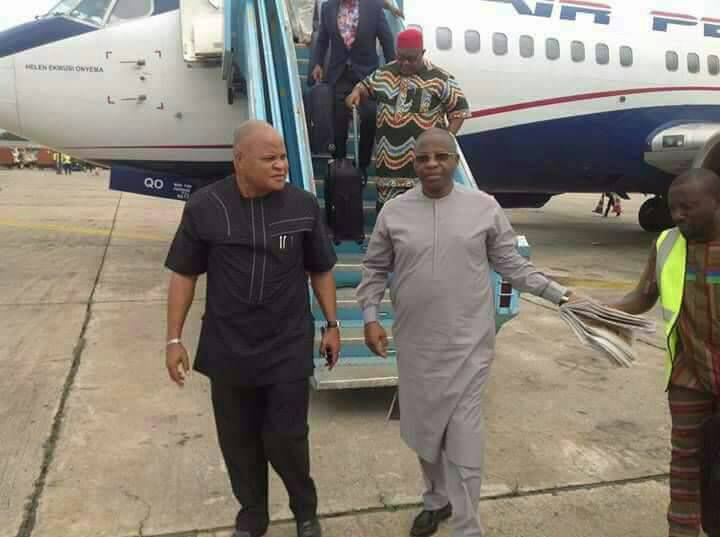 By Okey Alozie
The replacement of late Senator Benjamin Uwajimogu at the Senate chamber of the Federal Republic of Nigeria has split Okigwe Senatorial zone where the dead Senator was representing.
The war started the moment the news of the death of Senator Ben Uwajimogu was made public. He was representing six (6) Local Government Areas of Okigwe zone comprising of IhitteUboma, Okigwe, Onuimo, Isiala Mbano, Obowo and Ehime Mbano LGAs.
The clamour for his replacement and the heat generated by the political gladiators in the Area has escalated into war in the LGAs of Okigwe zone.
The war drum started with the release of a video clip showing the endorsement of a particular Aspirant.
Front line Traditional rulers of the area had come out openly recently denied endorsement of Aspirant and rumour had said otherwise. The front line Traditional Rulers led by HRH Eze Oliver Ohanwa described the endorsement by 4 Ezes out 140 Royal fathers of Okigwe as a sabotage and act to fuel the political crisis in the area. Since that endorsement Okigwe zone political leaders, traditional rulers, youths and women of the area have been at war.
Information available to our news desk revealed that former governor of Imo State, Chief Ikedi Ohakim, Senator Ifeanyi Araraume, former Secretaries to Imo State government Chief Mark Uchendu and Chief Chris Okewulonu, Ben Uwajimogu’s sister Chidinma and other political gladiator including Rt Hon Mathew Omegara have all joined the race for the Senate seat.
The war at the immediate family of Senator Ben Uwajimogu is between his wife Elieen Uwajimogu and his sister Chidinma Uwajimogu who also want the seat.
Former Governor Ikedi Ohakim and his own brother Senator Ifeanyi Araraume are at war in their LGA Isiala Mbano.
Mathew Omegara as we learnt came out after the death of Ndubuisi Emenike who is widely believed to have been the best replacement for Ben Uwajimogu. Emenike’s mysterious death is now causing a lot of trouble in Okigwe zone.
The concerned citizens of Okigwe zone for now are said to have endorsed Mathew Omegara who according to them is the most experienced politician now in Okigwe zone. Meanwhile, it is said that it is the turn of Okigwe LGA and Onuimo LGA to produce a Senator that will represent the zone in line with equity arrangement.
The Leader of Okigwe zone concerned citizens, Eze Ken Christopher said that in all ramification, the right person to go for the Senate seat is Rt Hon Mathew Omegara because of acceptability and credibility, adding that the vacant position is exclusively reserved for Okigwe and Onuimo LGAs.
Tanko, Tinubu, Masari Meet Over Apex Court Ruling
National Leader of All Progressives Congress (APC) Asiwaju Bola Ahmed Tinubu and Kastina State Governor, Alhaji Aminu Bello Masarii reportedly had a closed door meeting on Monday in Abuja with the Chief Justice of Nigeria , Justice Tanko Mohammed over the Supreme Court controversial judgment on Imo governorship election
It was authoritatively gathered the meeting was held to enable them strike veritable options on how to resolve the debacle that has arisen from the Supreme Court judgment
The apex court had on Tuesday January 14 awarded Senator Hope Uzodinma unverified 213,000 votes from 388 cancelled polling units and consequently declared him winner of the election even though he was placed fourth by the Independent National Electoral Commission without a House of Assembly seat to his party’s credit
The apex court”s additional votes resulted in the recorded total number of votes exceeding the total number of registered voters in the state
The evident subversion of justice inherent in the judgment has touched off country-wide and global protests and condemnations and thus escalating tension across Nigeria
A reliable source at APC headquarters in Abuja who confirmed the Monday’s meeting involving Tinubu, Masari and the CJN disclosed that some leaders of the party are neither comfortable with the injustice that pervaded the judgment nor the ripples it is generating in the polity and therefore pushing for a redress
Although the source could not provide the details of the meeting he however revealed that the Monday meeting was connected to the Supreme Court judgment on Imo and how to forge a way forward
The source further disclosed that the leaders of the ruling party including President Muhammadu Buhari and the members of the National Executive Committee (NEC) and the National Working Committee (NWC) are jolted by the large-scale demonstrations that have attended the judgment.
According to the source, the ruling party leaders are further confounded by the level of clerical errors that underlined the judgment that saw the removal of Rt. Hon. Emeka Ihedioha CON as governor of Imo State and are accordingly interested in seeing the judgment revised
In Nigeria legal system, clerical errors are said to be human mistakes, usually in note taking or errors of calculation of numbers and figures made in the delivery of the Supreme Court judgment in any given matter, which appeal is brought to the apex court for review
Only on Friday, 31st January, 2020, the APC National Chairman, Adams Oshiomhole and Senator Uzodimma were reportedly invited to a meeting with
President Buhari over the same matters arising from the Supreme Court judgment. According to a source at Presidential Villa the Nigerian leader was not pleased with the dusts the judgment has been generating and he berated both Oshiomhole and Uzodimma for the bad image the judgment has created for the Supreme Court, the Nigerian judiciary and the Federal Government.
The source added that the president asked them to return to the Supreme Court to ensure that the right thing is done by redressing the controversial and contentious judgment.
The meeting with the president on Friday, which was followed by Monday meeting that involved Tinubu, Masari and the CJN provided a plausible link to authenticate the Federal Government’s inclination towards revisiting the judgment.