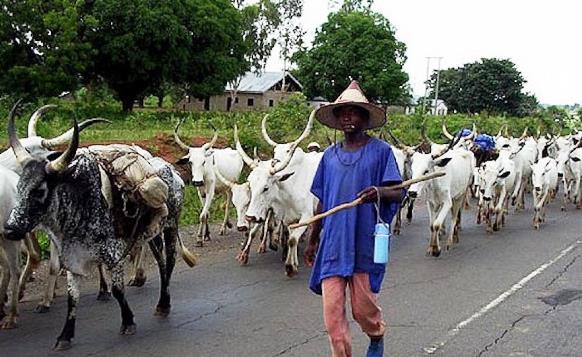 The Nwangele Local Government Area Security Council has raised the alarm over what they described as an invasion of the area by suspected Fulani Cattle Rearers and the attendant rape of women and destruction of crops planted by farmers in the area.
The Security Council is made up of the Council Chairman, Traditional Rulers of all the Autonomous Communities and heads of all Security Agencies in the area.
Speaking to newsmen after a closed-door meeting at the Council Headquarters yesterday, on their resolutions, the Security Council expressed serious concern over what they described as palpable tension and impending doom and called on security agencies to arrest the situation before it gets out of hand.
According to them, two indigenes have had their fences pulled down by these unscrupulous cattle rearers who also invaded their compounds with cows. The people can no longer sleep with two eyes closed; they can’t go to their farms for fear of being attacked and are also afraid of these people because credible information available to us have it that they are armed with Assort Riffles and other dangerous weapons. They said the traditional rulers being the custodians of the peoples tradition and culture decided to come and meet with the council chairman and Heads of all Security agencies to nip this ugly development in the bud before the situation gets out of hand. Because according to them, the youths who can no longer sit and watch their mothers and sisters being raped and crops destroyed are loosing patience and may decide to take laws into their hands which may lead to blood bath in the area.
The Security Council appealed to the State Government and Security Agencies to come to the rescue of Nwangele people. They said open grazing of Animal have been abandoned by the civilized world and wondered why cattle owners in this part of the world still insist on open grazing as against Ranching which is healthier and safer.
In his remark, the IMC Chairman of the Area Hon Cosmos Iwuagwu promised to work relentlessly with the security outfits and agencies to forestall any breakdown of law and other.

The Council Boss who announced a total ban on any form of open grazing charged security agencies to deal decisively with defaulters.
According to Hon. Iwuagwu, this ban does not affect the Fulani’s herdsmen alone, even indigenes who rear goats and sheep must ensure they put them in Ranches so as to avoid the destruction of crops by these herbivorous. He said a stakeholder’s summit may be necessary and also announced the setting up of a joint security outfit to deal with people who may decide to flout the ban.
He said his government was aware that the people of the one who are predominantly farmers could not afford to have their crops destroyed as this would lead to food shortage.
The Council Boss who commended the State Governor Senator Hope Uzodinmathe operation Search and Flush a Joint Security outfit in the state assured the people of adequate security.
The Divisional Police Officer in the area who spoke on behalf of all other Security Agencies commended the people for their peaceful disposition and assured that the Security Agencies would meet immediately to roll out a plan to ensure peaceful co-existencein the area.He appealed for the cooperation and support of the people to enable security agencies serve them better.