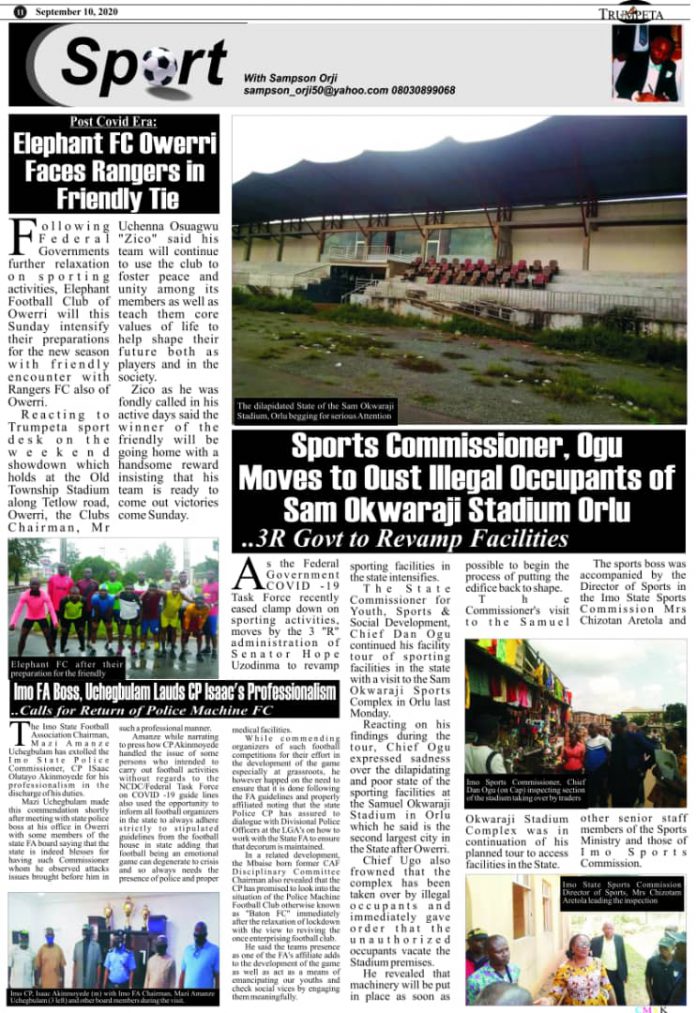 As the Federal Government COVID -19 Task Force recently eased clamp down on sporting activities, moves by the 3 “R” administration of Senator Hope Uzodinma to revamp sporting facilities in the state intensifies.

The State Commissioner for Youth, Sports & Social Development, Chief Dan Ogu continued his facility tour of sporting facilities in the state with a visit to the Sam Okwaraji Sports Complex in Orlu last Monday.

Reacting on his findings during the tour, Chief Ogu expressed sadness over  the dilapidating and poor state of the sporting facilities at the Samuel Okwaraji  Stadium in Orlu which he said is the second largest city in the State after Owerri.

Chief Ugo also frowned that the complex has been taken over by illegal occupants and immediately gave order that the  unauthorized occupants vacate the Stadium premises.

He revealed that machinery will be put in place as soon as possible to begin the process of putting the edifice  back to shape.

The Commissioner’s  visit to the Samuel Okwaraji Stadium Complex was in continuation of his planned tour to access  facilities in the State.
The sports boss was accompanied by the Director of Sports in the Imo State Sports Commission Mrs Chizotan Aretola and other senior staff members of the Sports Ministry and those of Imo Sports Commission.

The Imo State Football Association Chairman, Mazi Amanze Uchegbulam has extolled the Imo State Police Commissioner, CP ISaac Olutayo Akinmoyede for his professionalism in the discharge of his duties.
Mazi Uchegbulam made this commendation shortly after meeting with state police boss at his office in Owerri with some members of the state FA board saying that the state is indeed blesses for having such Commissioner whom he observed attacks issues brought before him in such a professional manner.
Amanze while narrating to press how CP Akinmoyede handled the issue of some persons who intended to carry out football activities without regards to the NCDC/Federal Task Force on COVID -19 guide lines also used the opportunity to inform all football organizers in the state to always adhere strictly to stipulated guidelines from the football house in state adding that football being an emotional game can degenerate to crisis and so always needs the presence of police and proper medical facilities.
While commending organizers of such football competitions for their effort in the development of the game especially at grassroots, he however happed on the need to ensure that it is done following the FA guidelines and properly affiliated noting that the state Police CP has assured to dialogue with  Divisional Police Officers at the LGA’s on how to work with the State FA to ensure that decorum is maintained.
In a related development, the Mbaise born former CAF Disciplinary Committee Chairman also revealed that the CP has promised to look into the situation of the Police Machine Football Club otherwise known as “Baton FC” immediately after the relaxation of lockdown with the view to reviving the once enterprising football club.
He said the teams presence as one of the FA’s affiliate adds to the development of the game as well as act as a means of emancipating our youths and check social vices by engaging them meaningfully.

Following Federal Governments further relaxation on sporting activities, Elephant Football Club of Owerri will this Sunday intensify their preparations for the new season with friendly encounter with Rangers FC also of Owerri.
Reacting to Trumpeta sport desk on the weekend showdown which holds at the Old Township Stadium along Tetlow road, Owerri, the Clubs Chairman, Mr Uchenna Osuagwu “Zico” said his team will continue to use the club to foster peace and unity among its members as well as teach them core values of life to help shape their future both as players and in the society.
Zico as he was fondly called in his active days said the winner of the friendly will be going home with a handsome reward insisting that his team is ready to come out victories come Sunday.