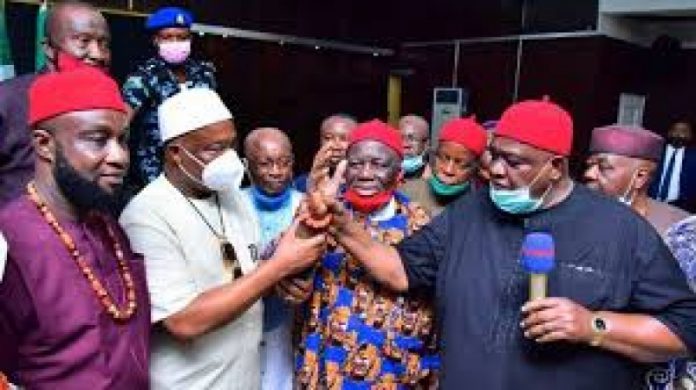 The much anticipated election for the Igbo Apex Socio-cultural organization, the Ohaneze Ndigbo, has come and gone, but not without leaving behind stories that characterized the election.

At the end of tenure of Chief Nnia Nwodo, the immediate past President General of Ohaneze Ndigbo, Imo State was bided to produce a successor.

The target was to ensure equity, hence the scramble for who fits in.

It was on that process that notable Igbo Leaders after series of meetings, declared Prof George Obiozor a consensus candidate for the stool.

Few days to the election held on Sunday January 10, 2021, at Dan Anyiam Stadium Owerri , some of the contestants stepped down and gave the Oru East born former Ambassador to USA and  Cyprus, their support.

However, Trumpeta correspondent that monitored the exercise at Dan Anyiam Stadium Owerri on Sunday witnessed with interest and enthusiasm on the faces of some of the South East serving Governors, led by the Imo State, Governor Hope Uzodinma.

The Governors joyfully queued behind their preffered candidate, George Obiozor, and stayed until the final results were announced.

Apart from the presence of the Governors, Senators and Ministers drawn from the South East States were conspicuously present.

Prof Obiozor polled 304 votes to defeat his rivals; Val Oparaocha and Uju Sergius Okoro that had 15 and 3 votes respectively.

Feelers inside the Stadium had it that with the events that surrounded the Ohaneze election, Obiozor may not have cruised home with victory if it was not by the unrelentless support of the Governors of Southeast who canvassed support for him.