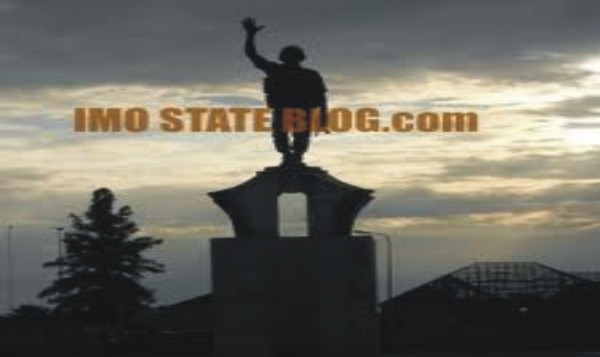 Governor Hope Uzodimma of Imo State has renamed the popular Heroes Square Stadium in the heart of Owerri, the Imo State capital, after the late Admiral Ndubuisi Kanu.

Admiral Kanu was the first Military Administrator of Old Imo State and Governor Uzodimma said that the late Naval officer’s administration impacted positively on the economy and infrastructure of Imo State.

At a brief ceremony to receive Admiral Kanu’s corpse on Wednesday at the Sam Mbakwe International Cargo Airport, Owerri, as part of activities to mark his Lying-in- State and Commendation Service at the Imo State Government House, Governor Uzodimma said the credit for the Owerri Master Plan goes to Admiral Kanu.

The Governor, therefore, proceeded to rename Heroes Square after the deceased officer – Admiral Ndubuisi Kanu Heroes square, noting that the decision was reached after due consultation and application of the Executive Order as it applies to his office.

Governor Uzodimma said that Admiral Kanu was a prominent Igbo son who served his people, his State and the country diligently and that he was instrumental to the return of democracy which Nigeria enjoys today following his involvement and other like minds in the National Democratic Coalition (NADECO).

He said Admiral Kanu will be sorely missed by Imo people, Ndigbo, Nigeria, the Military, particularly the Navy Community, his Civil Society associates and all those who came in contact with him.

The Governor who prayed God for the repose of Admiral Kanu’s soul also commiserated with the family for the loss and asked God to console them.

Earlier when the Military officers took delivery of Admiral Kanu’s corpse which was brought by the Nigeria Air Force Jet, the Commandant, Nigeria Naval College Finance and Logistics, Owerrinta, Navy Capt Usman Masari Bugaje had informed Governor Uzodimma that he had the instructions of his authorities to bring Admiral Kanu’s corpse to the Governor as well as for the family, to confirm that the corpse was his.

Some of the family members who confirmed Admiral Kanu’s corpse at the Airport include Ms. Simone Nnenna Abiona and Kelly Ndubuisi  Kanu.

“Ndubuisi Kanu is a man who represents heroes past. He is an indelible hero of Igbo extraction. He gave Imo the best of services and developed the best Master Plan for Owerri. Ndubisi Kanu is a humble, simple and a thorough bred gentleman,” Prof Njoku who represented Governor Uzodimma said and asked all to pray for the repose of his soul.

Explaining that Governor Uzodimma is determined to restore the Owerri Master Plan as conceived by Admiral Kanu, Prof. Njoku announced again that the governor has renamed the Heroes Square in Owerri after Admiral Kanu.

“It is now to be known and called “Ndubuisi Kanu’s Square.”

In his funeral oration, son of the former First Lady of Imo State, Mr. Kelly Ndubuisi Kanu said their father left a huge shoe difficult for them to fill, noting that they “will try their very best and with God’s guidance not to disappoint” their late father.

He thanked Governor Uzodimma and the people of Imo Abia and Lagos States for honouring his father and for the befitting burial.

Business mogul, Chief Emmanuel Iwuanyanwu in his tribute described Admiral Kanu as “one of the greatest things that happened to Igboland.”

“He is a man of courage and valour who served old Imo State, Igboland and Nigeria in general with all his heart.

Kanu was very intelligent, a foundation member and an elder of Imeobi of Ohanaeze Ndigbo,” Iwuanyawu explained.

To Prof. Maurice Iwu, a former INEC Chairman, “Admiral Kanu is a man of many parts who mean different things to different people.The Master Plan Ndubuisi Kanu drew for Imo State is what the State is using up to today.”

The Chairman Christian Association of Nigeria, Imo State Chapter, Rev. Dr.  Eches Divine Eches described him as a “rare gem who believed and trusted God in all he did.”

The Chief of Naval Staff represented by Flag Officer Commanding Central Naval Command, Yenogoa, Rear Admiral Kennedy Egbuchulem in his message described Admiral Kanu as one of their finest who left a lot of challenges to the officers following them behind.

He pointed out that in the places Admiral Ndubuisi Kanu served “his left legacies are worthy of emulation.”