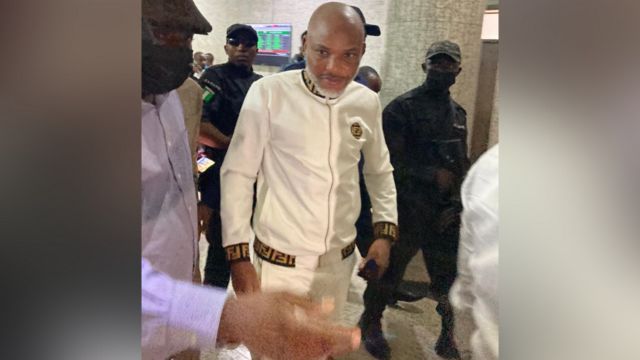 It has become obvious that the detained leader of Indigenous People of Biafra, IPOB, Mazi Nnamdi Kanu will spend this year’s Christmas festive in Federal Government captivity.

Kanu has been standing trial for several charges preferred him by the Federal Government. He was brought back by the government and has been in custody since July this year without getting bail.

After three court appearances since this year, no reprieve like bail has been offered to him meaning that he will spend the fast approaching Christmas in jail, pending the next adjournment date which has been fixed for January 18, 2022.

According to proceedings of the court Trumpeta monitored, Justice Binta Nyako of the Federal High Court in Abuja on Thursday shifted the trial of the detained leader of the proscribed Indigenous People of Biafra (IPOB), Nnamdi Kanu, from January 19 to 18 next year.

The shift in the trial date followed the abridgment of time granted by the judge following a passionate plea to that effect.

Kanu’s lawyer, Ifeanyi Ejiofor, had approached the court with an application seeking an order of the court to accommodate the trial in November and December this year as against the earlier fixed January 19.

Shuaib Labaran, who stood for the Federal Government, however, told the court that a counter affidavit opposing the request by the government has been filled and served on Kanu.

Justice Nyako however cut in and informed Kanu’s lawyer that the application for time abridgment cannot be considered because there is no judicial time for such an issue.

In the drama that ensued, the case diary of the court was read to the lawyer to establish that the court has other cases to attend to.

However, following the insistence, Justice Nyako agreed to shift other cases slated for January 18 to accommodate the trial which will last till January 19 and 20.

Justice Nyako ordered DSS to allow Kanu to practice his faith, change his clothes, and be given the maximum possible comfort in the detention facility.

However, reacting on the matter based on Thursday’s court proceeding,  Kanu’s lawyer, Alloy Ejimakor (Esq) in a message to Trumpeta states;

“First, there was total absence of security operatives in court and around the outer perimeters as was the case during previous proceedings.

“Second, Mazi Kanu was not in court and there was no officer from the DSS to explain why. But from what I surmised, both the court and the DSS might’ve concluded that his presence in court was not strictly required in the sort of application that was moved in court today.

“Third, the court did not grant Kanu’s Legal Team the leave to move our application challenging the jurisdiction of the court to continue the trial. Recall that we had filed such application, arguing that the extraordinary rendition of Kanu constitutes a constitutional barrier to his trial. The court ruled that the application was not calendared for hearing today. That it will be heard at the next adjourned date.

“Fourth, the court, after going through what it said is a tight judicial calendar, moved the date of the next hearing backwards from 19th to 18th January, 2022.

“Finally, the court ruled that it will entertain all outstanding applications at the next hearing; and proceeded to make the following Orders:

“That Mazi Kanu be given maximum comfort possible in the detention facility.

“That he be allowed a change of clothing.

“That he be allowed free practice of his Jewish faith including access to his Jewish religious materials.

“That the DSS obey all previous orders granted in the matter, including allowing Kanu any visitor of his choice.

“That Kanu be permitted, at his option, to mingle freely with other inmates or any other persons at the detention facility.