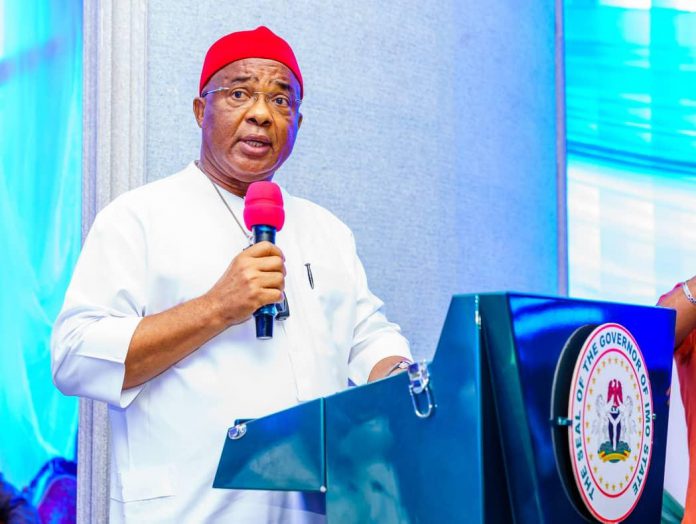 As the issue of who becomes the Vice Presidential candidate of the APC for next year’s general election continues to generate attention, Imo State Governor, Senator Hope Uzodimma who is a chieftain of the party has submitted that religion is not a factor for consideration.

Uzodimma’s position is coming against the backdrop of misinterpretation that has trailed his interview with State House Correspondents after a meeting with President Buhari in Abuja.

After the interview where Uzodimma barred his mind on the matter, media houses went away with different interpretation suggesting that the Imo State Governor advocated for a Muslim-Muslim ticket for APC ahead 2023 election.

Trumpeta recalls that at the end of APC Presidential Primaries held in Abuja, Bola Ahmed Tinubu a Muslim from the South West won and expectations are high that he would pick a Muslim north as Vice President.

Debunking the misconception on the part of the governor, Commissioner for Information, Imo State, Declan Mbadiwe Emelumba denied that at no time the governor made such position known.

He said that Uzodimma was emphatic that religion was not mentioned as a factor in the Constitution for the election of a President or his Vice. But he added that what the country needed was a good government that will accommodate the religious and ethnic diversity of the country. “How can this position amount to advocating for Muslim/ Muslim presidential ticket?” the Commissioner asked

Stating further in a statement on Wednesday Emelumba regretted that mischief makers twisted the answer given by Uzodimma to state House correspondents.

According to him” His Excellency made it clear that there is no part of the Constitution where religion is a factor in choosing the President or his vice”. But he quickly added that “what we are looking for is good governance that will unite the country and take cognizance of every tribe, every religion and every denomination”.

He said Uzodimma was emphatic that APC was looking for a ticket that will face the issue of governance squarely and not to talk of divisive issues.

The Commissioner enjoined those in doubt of what the governor said to obtain a clip of the recording from channels television.

He deplored a situation where the governor will be deliberately misquoted for ulterior motives.