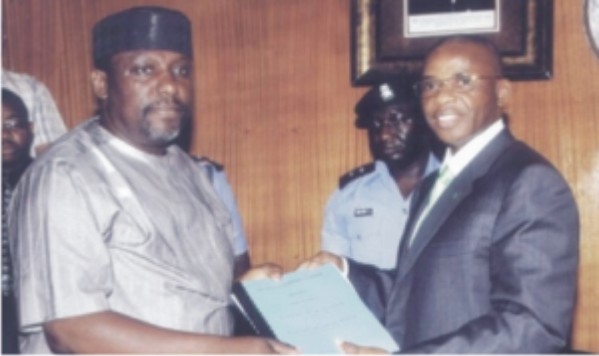 As the Supreme Court at Abuja seats this morning to rule on the application by the Imo State Governor, Owelle Rochas Okorocha urging the Apex Court to quash the joinder ruling by the Appeal Court that joined the PDP and its candidate in 2011 Imo Governorship election, Dr Ikedi Ohakim, in the suit filed by Senator Ifeanyi Ararume against INEC, there are indications that things may go awry for the Imo State Governor.
Reason? The All Progressives Grand Alliance, APGA, the political party under which Okorocha contested the election, has written the Apex Court to withdraw from the suit, thus asking their Lawyers to withdraw its party’s petitions from the matter.
In a letter written by the National Secretary of APGA, Alhaji Shikanfi, the party declared that it was no more interested in the matter, since Okorocha has dumped the party for APC.
The Imo State seat of power, the Douglas House, has been literally relocated to Abuja, as Governor Rochas Okorocha and his top Aides converge at the Supreme Court premises this morning to hear the prayer made by Okorocha asking the Apex Court to quash the ruling given in favour of the Peoples Democratic Party PDP, and its candidate, Dr Ikedi Ohakim on the 2011 Imo Governorship Supplementary Election.
Who-is-who in Imo PDP are also in Abuja to monitor this judgment which will make or mar the way forward in finally resolving the contentious Imo Governorship election, which has lingered for over two years now.
It would be recalled that Senator Ifeanyi Godwin Ararume, the candidate of the now defunct Action Congress of Nigeria, ACN, in the guber election in 2011, had approached the Lower Court to seek explanation if Supplementary Election exists in the country’s constitution and electoral Act, and if INEC has the power to conduct another election on May 6, 2011, after the first election of April 26, 2011.
However, as an interested party, the Governor of Imo State, Owelle Rochas Okorocha and his then political platform, the All Progressives Grand Alliance, APGA, sought to be joined in the matter, and got a ruling which joined the parties in the matter.
Also as interested parties in the said election, the PDP and Ohakim approached the Appeal Court which granted their prayers to join in the suit as well.
But Okorocha and APGA went to the Supreme Court to challenge the Appeal Court ruling which joined PDP and Ohakim in the matter.
It is this prayer by Okorocha against PDP and Ohakim that is heating the polity, and would be decided this morning at Abuja.
However, the outcome of today’s judgment will settle a lot of issues and cool many frayed nerves. If Supreme Court throws out Okorocha’s appeal this morning, it means that PDP and Ohakim will go back to the Appeal Court to see the matter to its conclusive end. But if the Apex Court quashes PDP and Ohakim’s Appeal Court joinder, it means that Ohakim and PDP will be out of the case, leaving Ararume, Okorocha and INEC to battle till the end.
But Legal pundits believe that the Supreme Court will grant PDP and Ohakim their prayers as ruled by the Appeal Court, since Okorocha himself was joined in the matter through same process.
Despite the analysis from legal luminaries, both parties are jittery, as any thing to the contrary could jeopardize their chances.
In apprehension of the unknown, the Imo State Government has been organizing some phantom demonstrations which many read as fear in Government quarters over the outcome of today’s judgment.
However, the news that APGA, the platform under which Okorocha won his election, but later dumped it for APC, have withdrawn its support to Okorocha today, may change the legal equation.
Whatever is the outcome of the matter today though, there is indication that the case will continue until Imo people, nay Nigerians know the authenticity of a Supplementary Election by INEC in Nigeria.
Meanwhile, it would be recalled that Governor Rochas Okorocha had earlier filed a case against the Supplementary Election on May 3, 2011 and yet participated in the May 6, 2011 Supplementary Election.