The closing ceremony of the Owerri-West unity football competition which commenced on the 19th of February, 2012, at the same ground was heavily attended by most of the House Assembly Members, SA’s to the Governor of the state, Chief Owelle Rochas Okorocha and chaired by the Speaker of the State House of Assembly Rt. Hon. Benjamin Uwajumogu.

In his remarks the donor of the cup Hon. Innocent Eke (Obulimba)stated that the championship is in line with the rescue mission agenda championed by the amiable Governor, Okorocha to empower the youths and take the dividend of good governance to the rural communities. He further informed the audience that his office in keeping to the promise to the people of Owerri-West, has canvassed for the rapid road construction in the local government area, the construction and rehabilitation of schools in Owerri-west communities, improvement of health care scheme programmes, establishment of the Agro-Allied industry to boost the development of agriculture and other related industries not just in Owerri-West, but in Imo state at large.

Meanwhile other consolation prize were given to the best player (MVP) #10,000 which was won by Ogundu Chukwuemeka (Sewanee) of Obinze, higest goal scorer #10,000 won by Chinedu Okorafor 6 goals also to Obinze, the best goalkeeper and #10,000 went to Uzoma Ukegbuof Umudibia while the best supporters club #25,000 and musical instruments went to Ihiagwa community and Umulum won the best behaved team and won #50,000.

In the final match, Obinze defeated Umudibia 1-0 to clinch the giant trophy and the #200,000 as Oforola won the 3rd place.

Presenting the trophy at the end of the match, the speaker Uwajumogu commended the efforts of Obulimba as a worthy representative of Owerri West in the House of Assembly with all the developmental project he as been attracting to the people, citing that in the next 3years Owerri West will be a new municipality of the state. He supported the championship with the sum of #250,000 to be shared #150,000 to the winner, #50,000 to the first runner-up and #50,000 to the second runner up, Obinze, Umudibia and Oforola respectively. 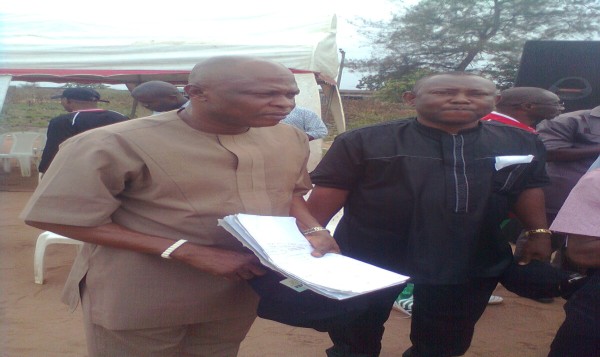