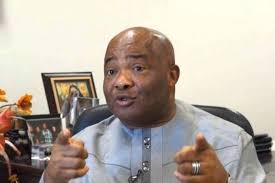 Part of the intrigues rocking the APC Ward Congresses in Imo State remain the absence of the Senator Representing Orlu Zone, Senator Hope Uzodinma from the scene of events.

Uzodinma, formerly of the PDP had early lasting week defected to the ruling party alongside the House of Reps Member for Ohaji/Egbema, Oguta, Oru West Federal Constituency and most of his followers who part of the Sheriff faction of the umbrella sign party.

The entry of Uzodinma few days to the Congresses raised eyebrows as there were strong indications that he would move in to create another faction in the already polarized party and battle for the structures of the party.

A statement from a leader of the party in the state and the governor, Owelle Rochas Okorocha that the governor is not welcomed to the party because he entered through the “back door” further fuelled speculations that the senator would be a threat to the contending factions as the Congress approached.

Trumpeta was surprised that Uzodinma was not only found missing but not available at crucial meetings of both camps during and after the polls.

Our roving correspondents who monitored the Congresses disclosed that Uzodinma did not join either the Okorocha group or that of the APC stakeholders comprising Araraume, Izunaso, Madumere and Ejiogu.

No comment has also been made by the lieutenants of the Senator concerning the outcome of the congress and nothing yet has come out of it.