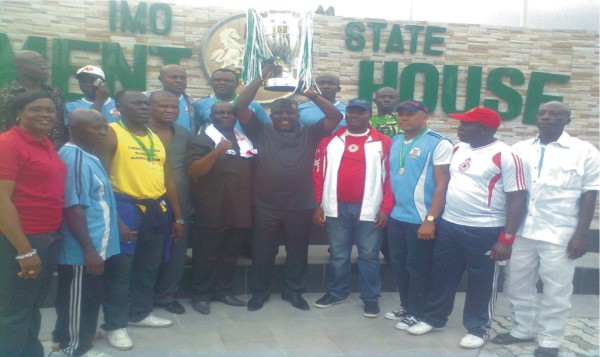 All things being equal, the lovely and beautiful wife of Heartland FC Sporting Director, Mrs Diana Paulina Diaz-Ekwueme is due to visit Nigeria, Trumpeta sports desk has gathered.
This paper can reveal that the Poznan born polish/Peruvian beauty Queen/ ambassador of TICO/SELECT sports wears is due for Owerri and the City of Assaba Nigeria as she will be observing the 2020 National Sports Festival to be held in Benin, Edo State sometime in March this year as special guest of the Delta State government.
Speaking to Trumpeta sports desk on this development, Heartland FC Sporting Director and former Super Eagles Winger, Ifeanyi Ekwueme who had most of his playing career in Poland (apparently were he met his hubby) said the prity pharmacist who measured in cosmotology will be touring the country and shall also take some time off to be the guest of the Delta State government as the Governor, Ifeanyi Arthur Okowa invited the beauty queen/ambassador of TICO/SELECT sports wear who are incidentally the kit sponsors of Delta state sports teams and Heartland FC.
Ekwueme who also played for Heartland FC further disclosed that his wife will equally use the opportunity to fratinze with her inlaws and get to know more of the husbands country.
The former NEPA FC of Umuahia, Jasper United FC of Nnewi, Polonia Warszawa of Poland among other clubs in Europe informed that the visit is a uneaque one as it will coincide with the commencement of the 20202 National Sports Festival in Edo state as she would also be modeling the TICO/SELECT sports wears.