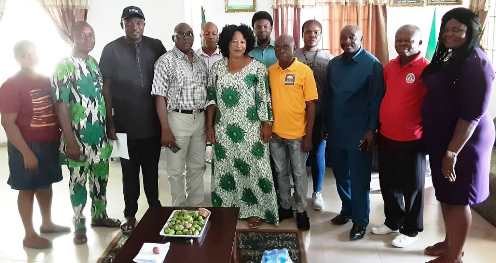 The USAID Effective Water, Sanitation and Hygiene Services, through their innovation Grant to Elizade University, has commenced its Focus Group Discussion, FGD, towards the development of Sanitation App across Imo State.

The Stakeholders meeting, targeted at having an interface with Household Sanitation end Users, which kicked off yesterday, November 9, 2020, with Okigwe LGA, will also cover Orlu, Oguta, Aboh Mbaise, Mbaitoli, and Owerri Municipal, respectively.

The meeting which could be best described as a collaborative meeting with relevant stakeholders of the aforementioned LGAs is aimed at ensuring citizen’s input in the Sanitation app, which is underway.

Also, the visit would help locate a preferred liquid dump site, as well as survey and  possibly get the geo-location that will be used for the App design.

Addressing the Interim Management Committee Chairman of Okigwe Local Government, Lady Nkechi Mbonu, in her office, the Project Lead and Bursar Consultants from Elizade University, Doctor Olayinka Osuolale, and Mr. Ajeigbe Olusegun, respectively, said the purpose was to intimate the public on the plans of creating and designing Sanitation App, that will take care of Sewerage, and liquid faecal sludge disposal.

They added that they would deliver by March, 2020, and officially handover to the Imo State Water and Sewerage Corporation, ISWSC to manage.

They opined that another major aim is to locate a dump site, their toilet facilities; whether pit or modern water system toilets, and such, would give the Service Providers or Collectors the opportunity to know where and how to dispose the liquid waste material.

“An advantage of the Sanitation App is to help checkmate indiscriminate and unhealthy sewerage practices, know the designated dumping sites, until a permanent Faecal Sludge Treatment Plant is installed in the State”, they said.

Further highlighting on how the App is going to work, it was said that it would be similar like “Uber, Bolt” App, where what would only be needed is to install it and make request of service, with a descriptive location and pricing.

Hence, they reiterated that the cardinal function is for liquid waste disposal.

The IMC Chairman, Lady Mbonu, however welcomed the team and promised to give the desired support towards the actualization of the set objective.

Responding on behalf of the People, Elder Francis C. Obi described it as a welcome development.

Elder Obi hinted that many buildings in Okigwe Urban have soak-away facility, without an appropriate dump site. He added that it has posed great health challenge to the residents of the area, and asked Government to fast track the exercise by creating a dump site so that once it is sucked, it will be channeled in the right place, other than being disposed indiscriminately.

“We must move towards the global trends.
Most of the houses use soak-away pits, and I haven’t seen a place where sewage is dumped in a designated place in Okigwe. At times, tippers carry it to bushes, and it is not ideal. So I totally support the sanitation app”.

Earlier, the CEO of Imo State Water and Sewerage Corporation, Engr. Emeka Ugoanyanwu affirmed that what USAID E-WASH, through the Consultants from Elizade University come to do is a bold step in a right direction.

Engr. Ugoanyanwu posited that lack of designated liquid disposal has posed great threat to health, as it is often deposited on river banks, thereby making it unsafe for drinking.

He assured the Corporation’s readiness in leaving no stone unturned in ensuring safely managed water, Sanitation and good hygiene.