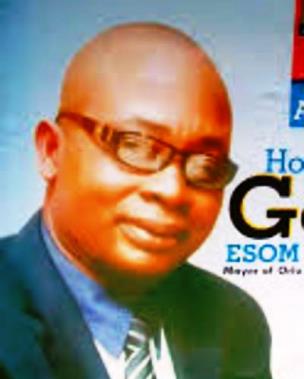 Given by his perceived massive human and infrastructural development across the length and breath of Imo State, the General Manager of Adapalm Nigeria Limited, Ohaji, Hon. Dr. Esom Obodo has enjoined the people to support the 3R administration of Senator Hope Uzodimma.

He made the plea while addressing his kinsmen during the get together of the organization known as “Ogbako Ohaji”, held on December 28, 2021.

Dr. Obodo enthused that since the emergence of Uzodimma as Imo’s Governor, the State has been recording tremendous achievements in all sector.

He recalled that as a former Lawmaker in Imo, he can beat his chest in affirming an effective governance brought to bare by Governor Uzodimma.

Obodo tasked the people of Ohaji  to support the State Government in all her lofty dreams and programs, adding that no State ever succeeds in the light of unrest and unhealthy rivalry.

Highlighting most of the activities of Adapalm, Dr. Obodo told them that under his watch as the GM, in collaboration with the State Government, there are legions of jobs created for the host communities.

He opined that the 3R administration is leaving no stone unturned in changing the narratives, as well as ensuring that what is theirs as democracy dividends reach them.

The Prince of the oil Kingdom as fondly called disclosed that Ogbako Ohaji before now used to be known and addressed as Ohaji Political Elites League, OPEL.

He stated that under the Group, issues concerning the welfare of Ohaji people are discussed and deliberated on, likewise proffering possible solutions to them.

He said, unlike before, there are numerous changes in the area.

Obodo urged them to shun envy, jealousy and money politics, and, to always support the right persons in positions of authority.

According to him, Adapalm, Obitti Rubber, ISOPADEC, good Roads network, electricity, health centers, schools are all gazetted by the Government for the overall interest of the people.

Earlier in his speech, the National President of Ogbako Ohaji, Sir Mike A. Nwobi described the Group as the apex socio-cultural organization in Ohaji district.

He submitted that as a non partisan association formed in 2018, their goal is basically targeted at pushing for the welfare of Ohaji indigenes.

With about two hundred persons as members, Sir Nwobi narrated the feat attained by his Executive.

Among them include the full registration of the association with Corporate Affairs Commission, transparency and accountability of his Leadership.

He decried of the nonchallant behavior of some of the members of Ogbako Ohaji, and asked that they place the interest and development of Ohaji, first.

While calling for full participation, the president assured of maximum cooperation.

The gathering however, ended in fanfare.