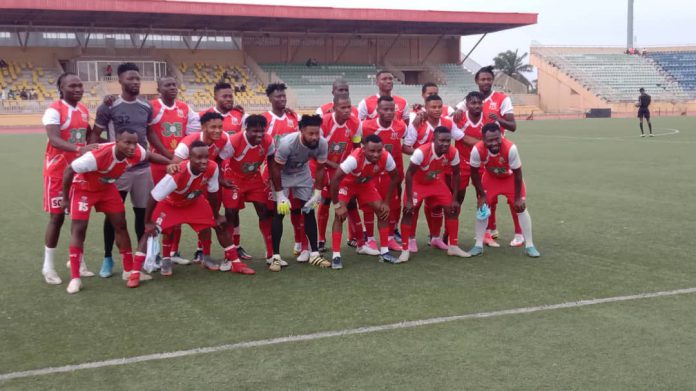 Heartland FC of Owerri yesterday qualified for the Semi final of Nigeria’s oldest cup competition, the Aiteo Cup.
The Naze Millionaires engaged Katsina United at the Kwara State Stadium Complex for a place in the last four.

After a scoreless stalemate during regulation time Godwin Paul once again stepped up to the plate to save Heartland’s blushes.

The former Enyimba goal keeper saved two  spot kicks as Heartland triumphed 4-1 on penalties with Chukwudi Nwaodu scoring the deciding spot kick.
As a result, Heartland has progressed to the last four of the AITEO CUP.

Although the main prize for the cup competition (CAF Confederation ticket) has been seeded to Kwara United by NFF following request deadline from CAF for submission of continental clubs, Heartland would continue to aim for the trophy hoping to apiece the fans after its capitulation from the league this season.

Naze Millionaires last won the tropy in 2012 when the Owerri Landlords came from behind to beat Lobi Stars of Makurdi 2-1 in Lagos to win the 2012 Nigerian Federation Cup final, as it was then called. The winning goal was scored by Bredard Ogbu at the final minute.

Heartland will next face Niger Tornadoes at Ibadan in the semi final on Sunday August 14 for a place in the final.