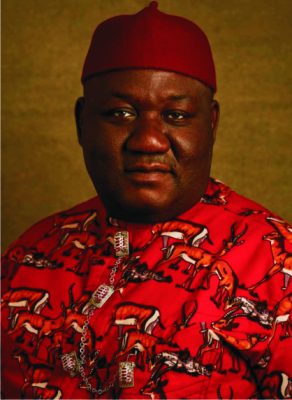 There was drama at the National Assembly Election Petitions Tribunal panel 2 sitting in Owerri Imo State Presided over by Hon. Justice D. S Wyom when Senator Ben Uwajimogu (APC) and his team of lawyers commenced their defence in the petition filled by Hon, Patrick Ndubueze the Senatorial candidate of the People’s Democratic Party (PDP}.

It was surprising that the Lawyer leading the team of lawyers Barr. Wisdom Durueke on behalf of Senator Uwajimogu announced closure of their case without any witnesses testifying for Senator Ben Uwajimogu.

Our reporter also reported that the Electoral Officers of Isiala Mbano Mr. Peter Okoye and Ehime Mbano Mr. Daniel Lifu who were listed by Uwajimogu’s lawyer’s failed to show up as they had earlier in the week testified for Hon. Ndubueze the P.D.P Senatorial Candidate/petitioner.

Surprisingly also Prof. Donatus Ohajianya the returning Officer for Imo North Senatorial election, who was present in today’s sitting was not called upon by Uwajimogu’s Lawyer to justify the purported Declaration he made.

The Judge finally adjourned the matter to August 14, 2019 for adoption for final addresses.